'Self-Eating' Cells and the Future of Medicine 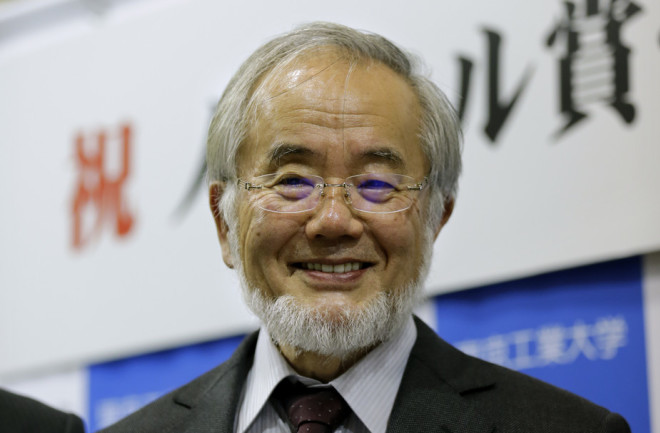 Yoshinori Ohsumi: a very happy man. (Credit: KIMIMASA MAYAMA/EPA) I am delighted that Yoshinori Ohsumi won this year’s Nobel Prize in physiology or medicine. His pioneering work in yeast led to the discovery of genes and biological processes that are needed for autophagy. Autophagy (from the Greek for “self-eating”) is the mechanism by which cells break down and recycle cellular content. Without this vital housekeeping role we’d be more prone to cancer, Parkinson’s and other age-related disorders. Although scientists have been aware of autophagy since the 1960s, it wasn’t until Ohsumi’s experiments with yeast in the 1990s that we began to understand the important role of this biological process. The autophagy process is remarkably similar across lifeforms. One function that is the same, from yeast to humans, is to protect cells against starvation and related stresses. In these conditions, autophagy allows cells to degrade large molecules into basic building blocks, which are used as energy sources. The discovery of key yeast autophagy genes that was led by Ohsumi was particularly powerful because it helped scientists to quickly identify the genes in mammals that have similar functions. This, in turn, has provided vital tools for laboratories around the world to study the roles of autophagy in human health and disease. With the knowledge that various mammalian genes are needed for autophagy, researchers could then remove these genes from cells or animals, including mice, and examine their functions. These types of studies have highlighted the importance of autophagy in processes including infection and immunity, neurodegenerative diseases and cancer.

The Importance of Ohsumi’s Findings

My laboratory, for example, found that autophagy can break down the proteins responsible for various neurological diseases, including forms of dementia (caused by tau), Parkinson’s disease (alpha-synuclein) and Huntington’s disease (mutant huntingtin). We are pursuing the idea that by increasing the autophagy process we could potentially treat some of these conditions. Another important consequence of Ohsumi’s discoveries is that they allowed subsequent studies that aimed to understand the mechanisms by which autophagy proteins actually control this process. Indeed, Ohsumi’s group have also made seminal contributions in this domain. This Nobel prize highlights some other key characteristics of Ohsumi and his work. One is that his laboratory works on yeast. At the time he made his discoveries in the 1990s, no one would have guessed that they would have such far-reaching implications for human health. Essentially, he was studying autophagy in yeast because he was curious. This basic research yielded the foundation for an entire field, which has grown rapidly in recent years, especially as its relevance for health has become more apparent. This should serve as a reminder to those influencing science strategy that groundbreaking discoveries are often unexpected and that one should not only support science where the endpoint appears to be obviously relevant to health. Ohsumi has also nurtured outstanding scientists like Noboru Mizushima and Tamotsu Yoshimori, who have been major contributors to the understanding of autophagy in mammals. Perhaps most importantly, he continues to do interesting and fundamental work. This Nobel prize is very well deserved for the man who opened the door to an important field.