Selectives sweeps and the alleles that love them

Another paper with another technique to detect positive selection in the human genome, Identification of local selective sweeps in human populations since the exodus from Africa:

Selection on the human genome has been studied using comparative genomics and SNP architecture in the lineage leading to modern humans. In connection with the African exodus and colonization of other continents, human populations have adapted to a range of different environmental conditions.

, we have identified chromosomal regions that are candidates for having been affected by local selection. Based on 1.6 million SNPs typed in 71 individuals of African American, European American and Han Chinese descent, we have identified a number of genes and non-coding regions that are candidates for having been subjected to local positive selection during the last 100 000 years. Among these genes are those involved in skin pigmentation (SLC24A5) and diet adaptation (LCT). The list of genes implicated in these local selective sweeps overlap partly with those implicated in other studies of human populations using other methods, but show little overlap with those postulated to have been under selection in the 5-7 myr since the divergence of the ancestors of human and chimpanzee. Our analysis provides focal points in the genome for detailed studies of evolutionary events that have shaped human populations as they explored different regions of the world.

Below the fold is a table with the candidate genes they picked up.... Update: John Hawks comments. 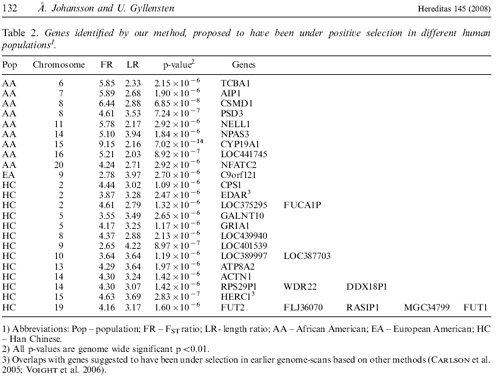