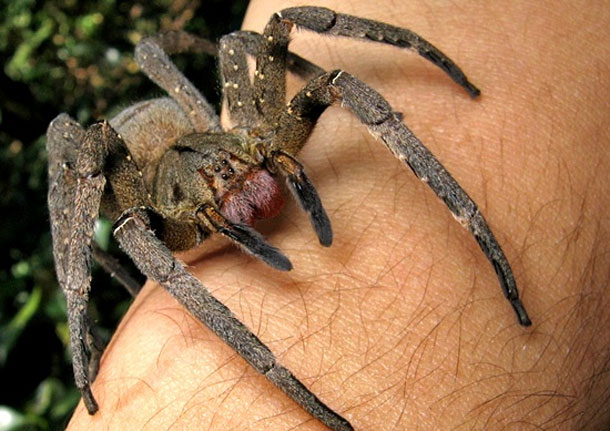 Spiders and penises are two things most people want to keep far, far apart. Until now. New research suggests that the venom of one aggressive arachnid could be used in future treatments for erectile dysfunction (that is, if it doesn't kill you first). Say hello to the Brazilian wandering spider (Phoneutria nigriventer), also known as the armed spider, or as the banana spider. With an over four-inch leg span, this South and Central American native normally creeps around banana plantations, although some have wound up in American supermarkets and Canadian grocery stores. Flaccid fellows beware: On top of severe pain, a single bite from this eight-legged foe can cause you to lose control of your muscles---and if it's not treated, the bite can screw up your ability to breathe so much so that you slowly die of oxygen deprivation.With a sip of the anti-venom, though, you'd recover in a week. And truth be told, only 10 people out of 7,000 are known to have actually died from a bite. Survivors tell of experiencing painful erections that last for more than four hours---a medical ailment known as priapism. It's this last side effect that interests Kenia Nunes, a physiologist at the Medical College of Georgia, who thinks this venom can be used to treat sexual dysfunction in both men and women. As outlined in her Journal of Sexual Medicine study, she first had to isolate the toxin to blame. “The venom of the P. nigriventer spider is a very rich mixture of several molecules,” Nunes told MSNBC. Feeding the active ingredient---a peptide called PnTx2-6---to a bunch of erection-challenged rats (with high blood pressure to boot), she discovered that it did indeed perk up these poor flaccid fellows. Aside from achieving side-effect-free erections, the rat's new-found potency is much different from drugs such as Viagra: Nunes discovered that the banana spider's toxin follows different pathways to create erections, which has a major advantage. Nunes told MSNBC:

“This is good because we know that some patients don’t respond to the conventional therapy,” she says. “This could be an optional treatment for them.”

Now she wants to see if this toxin can also help female sexual dysfunction. And if everything goes to plan, in the coming years, this spider toxin could wind up on drug store shelves and bedroom across the nation, causing shortness of breath of a very different kind. Related Content: 80beats: Study: The Chemical BPA, in High Doses, Causes Impotence 80beats: Skeptics of "Female Viagra" Say Drug Co's Are "Disease Branding" Discoblog: Viagra Could Be a Lifesaver for Muscular Dystrophy Patients Discoblog: Erectile Dysfunction Could Signal a Heart Attack