Scientists Look for DNA on Envelopes That Amelia Earhart Licked 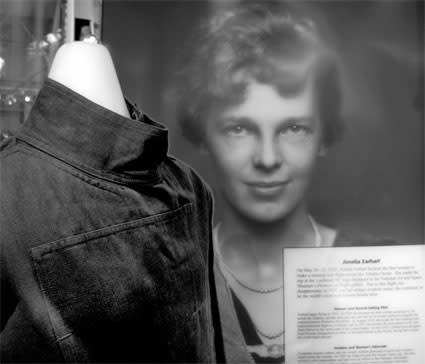 Researchers hope to collect spit from someone who died more than 70 years ago: the aviation pioneer Amelia Earhart. By extracting the famous flyer's DNA from old envelopes, researchers hope to finally put to rest one of the 20th century's greatest mysteries. Earhart disappeared--along with her navigator, Fred Noonan--in 1937, when she was trying to become the first female to fly around the globe. Communication with her plane was lost as she flew near Howland Island in the Pacific Ocean. The U.S. government searched in vain for the two adventurers' remains, and on January 5, 1939, Earhart was officially pronounced dead. But speculation never stopped on whether the duo died in a crash at sea, or whether they survived for some time on a deserted island. Just two years ago researchers from the International Group for Historic Aircraft Recovery found bone fragments on Nikumaroro Island that could be part of Amelia Earhart's finger. The finding is controversial because a dead sea turtle was also found nearby, raising suggestions that the purported piece of Earhart actually belongs to a turtle. According to National Geographic:

Right now, "anyone can go and find a turtle shell and be like 'I found Amelia Earhart's remains,'" said Justin Long of Burnaby, Canada, whose family is partially funding the DNA project. The Internet-marketing executive is the grandson of 1970s aviator Elgen Long, who with his wife wrote the 1999 book

But Dongya Yang, a genetic archeologist at Canada's Simon Fraser University, is leading a DNA project to sort out this mystery. Every time someone licks the adhesive on an envelope, they leave behind a little DNA in their spit, Yang notes. By completing the old "steam open the envelope" trick, he hopes to extract both mitochondrial and nuclear DNA from letters Earhart sent to her family. If the researchers can extract this genetic material, they can compare it to DNA from the bone fragment to determine whether the bone really belongs to Earhart. Because researchers have never taken DNA in this way, their first step is to practice the technique, as National Geographic reports:

"When we have the best technique available, that's when we'll move on to the real letters," Yang said.... Yang thinks it's very likely his team will find cells on the envelope seals, but how many cells are present will depend in part on how Earhart sealed her letters.... "A strong licking or a light licking may leave more or less cells with the seal," Yang said.

Theoretically, DNA could be extracted from a number of objects, from hair follicles to clothing. So why use old licked envelopes? Unfortunately Earhart's clothes have been dry-cleaned, which scientists say killed all traces of DNA, and there are no known locks of her hair in the archives. (One museum thought it had a strand of her hair, but in 2009 officials discovered that the "hair" was actually thread.) The usefulness of letters for this project is partly due to a 1930s trend: It was common back then to open letters on the side and using a letter opener, which means that the seals are still intact. Earhart's secretary would have licked many of her envelopes, but the researchers sifted through more than 400 letters and eventually selected four addressed to her family for testing. "[If] she's just at home writing a personal letter, there's much less reason for the secretary to be involved," Long told National Geographic. One of the major hurdles will be extracting enough nuclear DNA to make up a genetic portrait of Earhart. Stanford geneticist Brenna Henn told National Geographic:

"The problem is the majority"—about 99 percent—"of the nuclear genome is identical among all humans," she said. "If they could obtain little fragments, they have almost no power to discriminate between Earhart's DNA and that of other living people."

The researchers also have to make sure that it is indeed Earhart's DNA on those envelopes. To do this, they will compare the extracted DNA with DNA from a letter written by Earhart's sister, and with DNA from Earhart's surviving relatives. Despite the daunting technical process, the researchers hope to build Earhart's genetic profile within the next few months. Related Content: 80beats: Scientists Identify Mummified Head of a Murdered French King 80beats: Danish Astronomer Tycho Brahe Gets a Postmortem, 400 Years Late 80beats: Could Forensic Scientists ID You Based on Your "Bacterial Fingerprint"? The Intersection: CSI for the Genetic Age DISCOVER: Genetic Bar Codes DISCOVER: Dead People Science Won't Let R.I.P. (photo gallery)