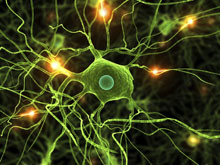 Injury to nerve cells in the brain and spinal cord, once considered permanent, may be reversible after all. A pair of new studies demonstrate how to override two biological mechanisms that prevent damaged cells of the central nervous system from regrowing. The first obstacle are genes that prevent nerve growth and the second are chemical signals that repress nerve growth.

"To have any manipulation that can make these axons grow from where they were severed near the retina all the way down the optic nerve is just amazing,"

identified a gene, PETN, that inhibits the major growth pathway in nerve cells. They created genetically modified "knock-out" mice that lacked the gene.

His team identified one such signal, a protein called PirB, that is found in the myelin sheath that wraps around nerve cells. By blocking the receptor for PirB, they could get nerve cells to regrow in cell cultures. Scientists believe the body makes regeneration of central nervous system cells especially difficult in order to prevent faulty reconnections. Although the new studies were conducted in mice and cell cultures, similar mechanisms likely operate in humans.

, lead author of the second study, also in Science [subscription required], explained that

when an axon in the spinal cord is severed, the cut end sprouts a growth cone. "It almost looks like a little hand at the end of this cable-like structure," he said. Tiny sensors on the growth cone pick up chemical signals. In nerves in the periphery of the body such as the finger, signals tell the axon to repair itself. But in the central nervous system, chemical signals repress growth [Reuters].

In the long run, the optimal strategy for treating spinal injuries may involve a combination of therapies that restore neurons' ability to grow axons and ones that counteract inhibitory signals near the injury. "You want to do each, and you may need to do both," says Tessier-Lavigne [Washington Post].