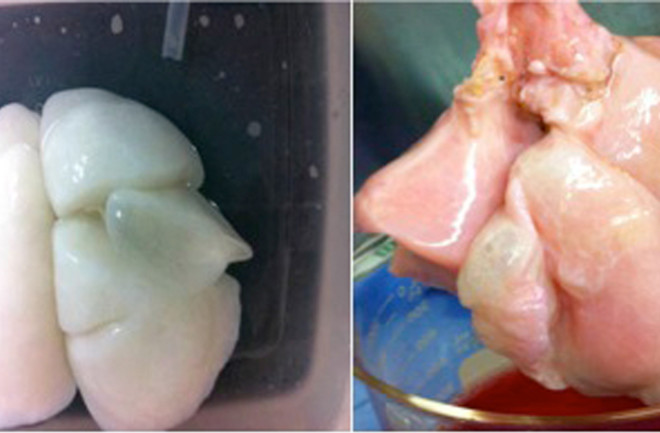 Researchers in Texas grew adult lungs (right) starting with "scaffolding" (left) that's left behind from a set of damaged lungs. Credit: University of Texas Medical Branch. Lungs are a notoriously delicate organ. That makes useable donor lungs hard to come by---in 2010, just 1,800 lung transplants took place in the United States. However, researchers are getting closer to addressing the shortage by growing lungs, for the first time, in the lab.Although these lungs haven't been actually transplanted, the technology could someday help shorten the list of people waiting for donors. Scientists at the University of Texas used damaged lungs from two children who died in car accidents. In a cutting-edge kind of tissue engineering, they stripped away all the cells from the lungs and left behind the “scaffolding,” the intricate web of proteins that holds cells in place. Researchers then coated this scaffold with viable lung cells from a second pair of lungs, not suitable for transplant. Finally, they placed the lungs in a nutrient bath for four weeks to allow the cells to grow and fully re-create lung tissue. The new lungs look like the real thing, just softer and less dense.

Speeding Up the Process

In the past, washing a donor organ of its cells could take up to four months to accomplish, but the latest study introduced a device that sped that process up to three days. The resulting lungs are eggshell white, because of the lack of blood flowing in the new organ. The team first grew the lungs in a lab last year, but waited to tell the world what they accomplished. Lead researcher Joan Nichols told KTRK-TV in Houston:

When will these lungs save the first human life? Don’t hold your breath. Although the team was successful, researchers say it will take at least 10 years before they are ready for people in need of a transplant. However, Nichols said they plan to test lab-grown lungs in pigs within the next year or so.