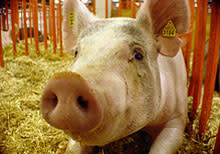 An Israeli biotech company says it has developed a way of freezing and then thawing a pig liver that doesn't destroy the organ, and says that the thawed out liver appeared to function normally when transplanted into a new pig. The company, Core Dynamics, says the work could lead to advances in human organ transplants, and could eventually allow for "banks" of frozen organs.

Organ donation schemes have to work fast to match organs with patients who need them, as, even if kept chilled, they can become unusable within 24 hours. Researchers have been looking for ways to preserve them by freezing, to cope with delays between donation and transplant operation [BBC News].

says the key to limiting cell damage during freezing is to cool the liver very slowly, as this prevents the formation of jagged ice crystals. Some frog species employ a similar technique when they allow parts of their bodies to freeze during hibernation. "We didn't invent this process, nature did," says Arav [New Scientist].

In the experiment, published in the journal Rejuvenation Research [subscription required], researchers first flushed all the blood from the liver before gradually lowering its temperature to -20 Celsius over the course of 90 minutes. They then reversed the process and gradually thawed the liver, and finally implanted it into a healthy pig alongside the pig's existing liver.

The liver recovered its red colour, and began to produce bile, signs of a healthy liver. The pig was killed about two hours later and the auxiliary liver analysed revealing the cells were alive. Dr Arav [said] he was not allowed to do more than a temporary secondary transplant because of restrictions imposed by animal welfare. He said: "We hope to repeat it and do those other tests next time" [Telegraph].

Arav says his future studies will experiment with how long the liver can be stored in its frozen state, and will also test whether a thawed liver can keep an animal alive when it's not just an auxiliary organ.