Scientists discover the fastest bats ever recorded, and they are faster than any bird. 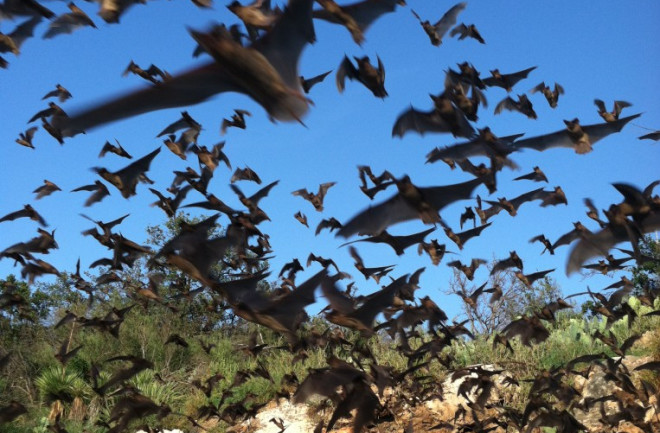 Image:USFWS/Ann FroschauerWhen it comes to fast flying animals, our minds naturally turn to the birds. But it turns out that, just like birds, some bats fly quickly while others mosey about. Here, scientists employed planes to track the flights of 7 bats (T. brasiliensis), and came away with a new flight record for speed:

We tracked a total of seven bats, one bat per night, from the air between 8 July and 15 July 2009. For this, one person (M.W.) flew with a Cessna 172 from Garner Field Airport, Uvalde, Texas, towards the Frio Bat Cave while another person (T.H.K.) was stationed at the entrance of Frio Cave to await the nightly emergence of the bats. With the airplane in place, T.H.K. caught one bat with a hand net out of the column of emerging bats. We only tracked post-lactating females weighing 11–12 g. A 0.45 g radio transmitter was attached to the back of the bats using surgical glue (Skin Bond, Canada). Transmitters emitted a continuous signal to allow for the detection of wingbeat frequency as well as the position of the bat [21]. The glue was allowed to dry for a few minutes, and the bat was released back into the column of emerging bats.

Although certain species of birds are very fast (the previous record was 69 miles per hour), these Brazilian bats are faster... a LOT faster. The scientists were able to track individual bats flying at 100 miles an hour (44.5 m/s). Hey, it may not be as fast as Superman, but it's certainly faster than Batman!Airplane tracking documents the fastest flight speeds recorded for bats. "The performance capabilities of flying animals reflect the interplay of biomechanical and physiological constraints and evolutionary innovation. Of the two extant groups of vertebrates that are capable of powered flight, birds are thought to fly more efficiently and faster than bats. However, fast-flying bat species that are adapted for flight in open airspace are similar in wing shape and appear to be similar in flight dynamics to fast-flying birds that exploit the same aerial niche. Here, we investigate flight behaviour in seven free-flying Brazilian free-tailed bats (Tadarida brasiliensis) and report that the maximum ground speeds achieved exceed speeds previously documented for any bat. Regional wind modelling indicates that bats adjusted flight speeds in response to winds by flying more slowly as wind support increased and flying faster when confronted with crosswinds, as demonstrated for insects, birds and other bats. Increased frequency of pauses in wing beats at faster speeds suggests that flap-gliding assists the bats' rapid flight. Our results suggest that flight performance in bats has been underappreciated and that functional differences in the flight abilities of birds and bats require re-evaluation." Related content: Bats eavesdrop on the sound of copulating flies.I vaaaant to suuuuck your…Cunnilingus increases duration of copulation in the Indian flying fox.