Scientists Discover a Promising Target for a Malaria Vaccine 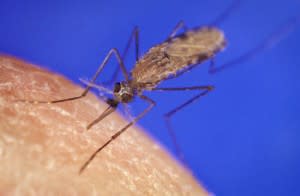 Despite the millions of dollars devoted

and outreach, malaria has largely evaded our best efforts at eradication

. The various strains of the protozoan that causes it, Plasmodiumfalciparum, use a number of different molecular methods to gain access to the red blood cells they infect, with no single molecule in common, and a common molecule, of course, is a requirement for developing an effective vaccine. But scientists now report that using a new technique, they've found a molecule that seems to fit the bill

. It's a surface molecule called PfRh5, and the team found it by using a special chemical treatment that keeps the fragile interactions between protozoan surface molecules and red blood cell surface molecules intact for study. They noticed that the protozoa were latching onto a particular blood cell molecule, and when they made red blood cells without that molecule, the protozoa were locked out. Sending in antibodies that perched on the molecule and kept protozoa from engaging with it also worked. They tried it with fifteen different strains, and it worked for all of them, an unusual---and exciting---success. PfRh5, it turned out, was the molecule the protozoa were using to attach to the blood cell. While PfRh5 is one of the most promising leads found yet, it takes more than a common molecule to make a vaccine. The molecule needs to provoke a substantial immune response when it's injected into an animal or human (that, after all, is how vaccines make us immune to disease; they prime our immune systems ahead of time), and it also needs to be exposed enough on the protozoan's surface for antibodies to find it. Additionally, as one parasitologist told ScienceNOW

, to avoid the protozoan developing resistance, it would be best to make a vaccine with several different molecules, or use a vaccine based on PfRh5 along with another vaccine---perhaps the GlaxoSmithKline vaccine announced earlier this year

, which was somewhat successful in preventing disease.