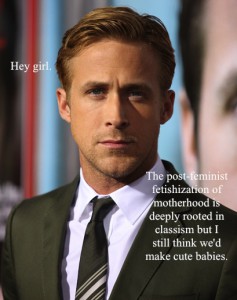 Hey girl. You've probably seen those Ryan Gosling memes floating around the interwebs--you know, the ones where he says all the things girls like to hear. Well, these scientists set out to see if memes can garner more than just a laugh, and investigated whether they could actually change people's views on important subjects. To do so, they showed groups of men and women a variety of Ryan Gosling feminist memes, and then tested whether the memes had any effect on the participants' feminist beliefs. Surprisingly, although the men didn't rate themselves any more feminist after seeing the memes, they did display "significantly higher endorsement of subtypes of feminism (radical and social)." The results were presented at the 2014 Canadian Psychological Association annual conference (abstract below). We assume these scientists are already hard at work on their follow-up study focused on how magnets work.

The Effect of Ryan Gosling Feminist Memes on Feminist Identification and Endorsement of Feminist Beliefs "This study examined the impact of Ryan Gosling feminist memes on feminist identification and endorsement of feminist beliefs. Participants were asked to complete a one-item measure of feminist identification and then complete an adapted version of the Feminist Perspectives Scale (FPS) which measured endorsement of feminist beliefs. Contrary to our hypothesis, the experimental meme group did not display a greater level of feminist self-identification than the control group. In partial support of our hypothesis, the meme group displayed significantly higher endorsement of subtypes of feminism (radical and social). Upon further examination of these group differences with respect to endorsement of radical and socialist feminist beliefs, the meme effect was evident for men on radical but not socialist feminism. In contrast, there were no group differences found for women on endorsement of radical or social feminism. The results of this study provide initial support for the notion that popular internet memes can serve more than an entertainment function in that they can also serve as a persuasive device for relaying ideological information. This research was presented at the Canadian Psychological Association (CPA) annual conference in Vancouver British Columbia in June 2014." Related content: The rival wears Prada: luxury consumption as a female competition strategy.Facial attractiveness is predicted by parental income during childhood.According to this study, artists are more “manly” than regular folk.