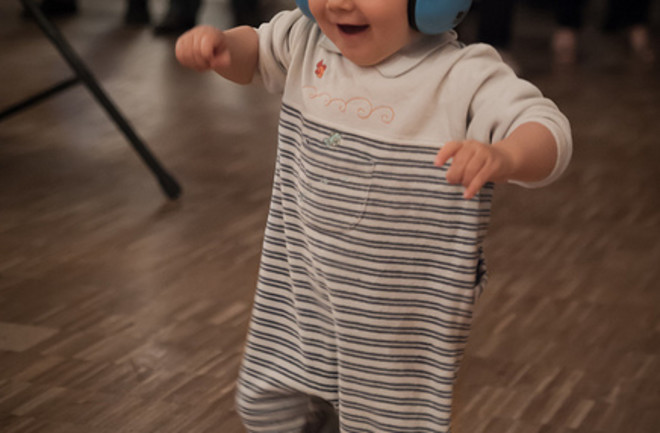 By the time they're toddlers, many kids can dance up a storm, but how early do children develop rhythm? Here, in what is one of the cutest scientific studies we've seen in a while, a group of Japanese scientists set out to answer this question by playing music by the Backstreet Boys (as well as WANICO, a Japanese artist) to 3- and 4-month old babies. To determine whether the wee ones were moving to the music, the researchers computationally tracked white circles attached to the babies' ankles and wrists. It turns out that although most of the babies did not seem to move with the beat, a couple had particularly good rhythm. Be sure to check out the videos below for your daily dose of cuteness!

Precursors of Dancing and Singing to Music in Three- to Four-Months-Old Infants "Dancing and singing to music involve auditory-motor coordination and have been essential to our human culture since ancient times. Although scholars have been trying to understand the evolutionary and developmental origin of music, early human developmental manifestations of auditory-motor interactions in music have not been fully investigated. Here we report limb movements and vocalizations in three- to four-months-old infants while they listened to music and were in silence. In the group analysis, we found no significant increase in the amount of movement or in the relative power spectrum density around the musical tempo in the music condition compared to the silent condition. Intriguingly, however, there were two infants who demonstrated striking increases in the rhythmic movements via kicking or arm-waving around the musical tempo during listening to music. Monte-Carlo statistics with phase-randomized surrogate data revealed that the limb movements of these individuals were significantly synchronized to the musical beat. Moreover, we found a clear increase in the formant variability of vocalizations in the group during music perception. These results suggest that infants at this age are already primed with their bodies to interact with music via limb movements and vocalizations." Bonus videos from the full text: