Science explains why comedies are funnier when you see them in a crowded theater. 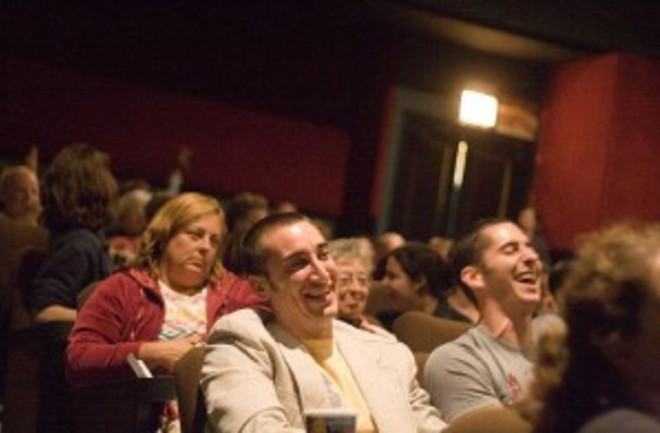 Photo: flickr/jernstWe've all experienced it: the same movie is so much funnier when you see it on opening night with a group of friends compared to watching the DVD by yourself. What causes this difference? Here, a group of psychologists tested the idea that it's knowing that you are part of a group watching a movie or looking at photos that makes emotions like humor more intense. They found that indeed, having members of one's group (for example, other students at the same college) watching the same thing caused participants to view happy videos as happier and sad videos as sadder. This effect even held when the other members were not physically present, but were known to be watching at the same time online. So, the next time you cancel a movie date at last minute, do your friend a favor and tell them you're watching it online anyway. Even if it isn't true, it might make their night a bit better.Feeling More Together: Group Attention Intensifies Emotion. "The idea that group contexts can intensify emotions is centuries old. Yet, evidence that speaks to how, or if, emotions become more intense in groups remains elusive. Here we examine the novel possibility that group attention-the experience of simultaneous coattention with one's group members-increases emotional intensity relative to attending alone, coattending with strangers, or attending nonsimultaneously with one's group members. In Study 1, scary advertisements felt scarier under group attention. In Study 2, group attention intensified feelings of sadness to negative images, and feelings of happiness to positive images. In Study 3, group attention during a video depicting homelessness led to greater sadness that prompted larger donations to charities benefiting the homeless. In Studies 4 and 5, group attention increased the amount of cognitive resources allocated toward sad and amusing videos (as indexed by the percentage of thoughts referencing video content), leading to more sadness and happiness, respectively. In all, these effects could not be explained by differences in physiological arousal, emotional contagion, or vicarious emotional experience. Greater fear, gloom, and glee can thus result from group attention to scary, sad, and happy events, respectively." Bonus figure from the main text:

Related content: NCBI ROFL: Get angry. Get noticed.NCBI ROFL: Experimental setup: listen to laughter while a scientist burns your hands with a laser.NCBI ROFL: Dying with laughter…literally.