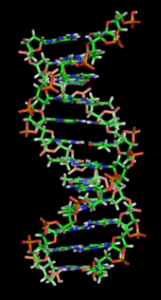 The genetics of schizophrenia is a fertile if fraught topic. But I won't be discussing that in this post. Rather, I want to put the spotlight on a peculiar contradictory and illogical tendency in the contemporary American Zeitgeist: the gene is all-powerful, and the gene is irrelevant. The same people who raise eyebrows with skepticism about the heritability of endophenotypes, nevertheless seem to believe that when it comes to the domain of disease genes are perfectly and frighteningly predictive! I know scientifically educated people who have expressed to me their confidence in the power of nurture, as opposed to nature, in the determination of the character of their potential offspring. And yet these same individuals may express serious worry that genetic testing might render the whole field of health insurance null and void. The problem with this perspective is that it is a robust behavior genetic finding that many traits have substantial heritable components. That is, the correlation between parent and offspring in a trait (e.g., personality) is not simply a function of environmental input. Similarly, for many diseases which have a biological basis the predictive value of a given set of genes, or even family history, is often imperfect. Biological development has a strong random component, which we can't predict or control. This is true even for environmental inputs as well; there are people who have never smoked who die of lung cancer. One component of this dichotomy is easy to characterize. Across various cultures the "nature vs. nurture" question has been answered differently. In the West a form of the "blank slate" arguably was prominent in the Enlightenment, only to disappear during the 19th and early 20th century, and to reappear with Behaviorism (at least in its more vulgar fashion). But that's not the only issue at work here. Why do people believe that genes are so powerful in predicting disease, and the theoretical course of one's life in a general sense? Why does the discovery of an Ashkenazi genetic background transform Neo-Nazis into Jews in an ideological sense? There are genetic variants which are correlated with Ashkenazi Jews, but there are no genes for Ashkenazi Jewish identity in a determinative sense. And, despite the superficial nurturist ideology which dominates American society (e.g., "no child left behind!") the attraction to crass genetic determinism (e.g., "the God gene") which explodes upon the popular culture periodically suggests that there is a latent undercurrent of genetic essentialism waiting to be tapped. To get the root of what's going on here we have to look to cognitive psychology, and how our minds are disposed toward organizing the world around us. We order the world, and see patterns. When Einstein asserted that "God does not throw dice," he was not only reflecting a common theological position (mainstream among Sunni Muslims and Calvinists, and to some extent other religious traditions), but also a deep intuition that the world is as it is in a necessary sense. It is no accident. We are no accident. Time has a logic and order. Similarly, we see around us different classes of natural objects (e.g., inanimate vs. animate), and natural kinds of organisms (e.g., fish vs. fowl). The psychologist Paul Bloom, among others, has written about the tendency toward innate essentialism (see a Descartes' Baby) at length. Even infants seem to perceive that the identity of an object or organism is not wrapped up simply in its exterior form or manifestation. The reflex that transgender individuals are essentially what they were born is a very primal sentiment. Tied in with this essentialism is the idea that humans in particular have souls (the mind-body dichotomy), or specific seats of their being. Some of the ancients located the position of the soul, the identity, in the heart, while other did so in the head. Rene Descartes formalized the intuitions about the souls in a rigorous modern sense with his dualism (though obvious dualistic philosophies predate Descartes). One reason that modern cognitive neuroscience is so "sexy" is that even stone cold materialists likely have an intuition which corresponds to the general idea of the soul, and this scientific field plumbs those depths. "Human nature," and its material embodiment, is a thing, rather than a collection of disparate phenomena welling up from banal material processes. The peculiar tendency to imbue genes with great power also emerges from the intuition that individuals have essences, and those essences are not subject to the throw of the die. Pre-modern people did not have the idea of the gene, but the nature of the human mind is that it uses the contemporary furniture to make sense of the world, and render it comfortable and non-threatening. Ergo, the co-option of quantum mechanics by a variety of mystical beliefs. Similarly, the idea of a "genetic blueprint," the "plan of development" for the human being, naturally merges with pre-existent intuitions as to a specific special instance of a human, and the nature of the fate of that instance. You are who you are, and you could be no other. The problem is that nature corresponds only loosely with human intuition. This is more and more true as we move away from the scale of human life in a concrete and abstract sense. Human genealogical intuitions mislead us as we coalesce our ancestries back to a finite set of common founders. Inheritance seems blended, not discrete. Matter seems composed of fundamentally different essential constituents, rather than complex assortments of subatomic particles. In relation for what this means about genetics, it means that it matters in many contexts. But it is not an all or nothing affair. We wish to order the joints of the world by a discrete set of clean composed elements, but more often universe's true form would seem to us more a confused mishmash. So be it. It is what it is.