Cardiovascular disease is the world's leading cause of death. Approximately every 25 seconds, an American has a heart attack. One of the vessels to the heart gets blocked, cutting off blood flow to part of the heart. Then, the starving tissue begins to die, causing pain in the chest and difficulty breathing and, eventually, death. Every minute, someone in America dies from one of these coronary events. Those that survive the attack are still at risk for future problems as dead heart muscle leads to scar tissue that weakens the heart and increases the chance of heart failure. Until now, there was little that could be done for them, other than to encourage healthy lifestyle practices. Just this week, Gladstone researchers announced a major breakthrough in heart disease research: they successfully reprogrammed scar tissue in live mice back into functional heart muscle. 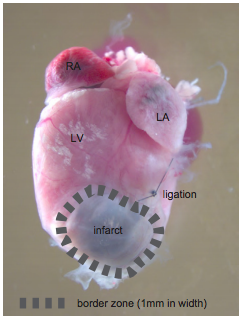 The researchers were able to use a virus-based system to deliver three key genes that guide embryonic heart development—Gata4, Mef2c and Tbx5 (GMT)—to areas of mouse hearts that were damaged in a heart attack. Within a month, cells that normally became scar tissue were beating away again as if they were not knocking on death's door just 30 days before. By the three month mark, treated mice showed marked improvements in cardiac functioning. "The damage from a heart attack is typically permanent because heart-muscle cells—deprived of oxygen during the attack—die and scar tissue forms," said Dr. Deepak Srivastava, director of cardiovascular and stem cell research at Gladstone. "But our experiments in mice are a proof of concept that we can reprogram non-beating cells directly into fully functional, beating heart cells—offering an innovative and less invasive way to restore heart function after a heart attack." "This research may result in a much-needed alternative to heart transplants—for which donors are extremely limited," said lead author Dr. Li Qian, a post doc at the California Institute for Regenerative Medicine. But the best part is that this method would use the person's own cells, removing the need for stem cells or donor hearts. "Because we are reprogramming cells directly in the heart, we eliminate the need to surgically implant cells that were created in a petri dish." "We hope that our research will lay the foundation for initiating cardiac repair soon after a heart attack—perhaps even when the patient arrives in the emergency room," said Srivastava. The ability to regenerate adult heart tissue from its own cells is a promising approach to treating cardiac disease because it may face fewer obstacles to clinical approval than other approaches. However, there is much to be done before this breakthrough becomes a treatment. "Our next goal is to replicate these experiments and test their safety in larger mammals, such as pigs, before considering clinical trials in humans." Previous work has been able to do this kind of cellular reprogramming in cultured cells, but clinically it is much more efficient if a treatment can work directly on live hearts. In 2010, coronary heart disease was projected to cost the United States $108.9 billion, including the cost of health care services, medications, and lost productivity. If research such as this can lead to improved functioning after a heart attack, it could save millions in health care costs, not to mention potentially save lives by preventing heart failure down the line. While this research's implications for heart disease treatment is clear, this kind of in vivo reprogramming may be also useful in a variety of other diseases where tissue damage is a major cause of symptoms, including Alzheimer's and Parkinson's disease.