Revealed: The Secret of the Sperm's Wild Dash to the Egg 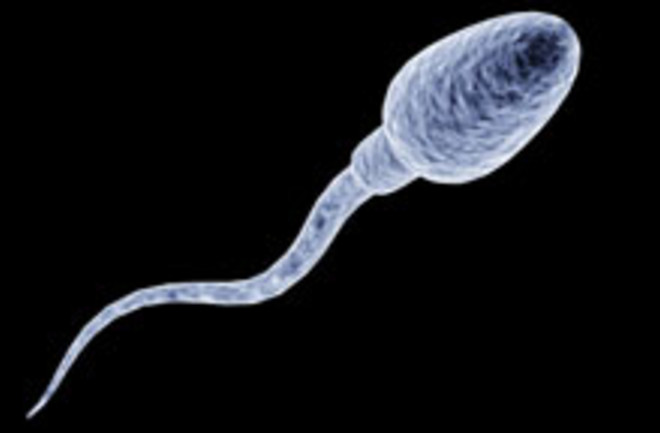 When it comes to a sperm fertilizing an egg, it all comes down to speed and timing. If the sperm starts swimming at top speed too soon, it will die before it reaches the egg. But if it swims too slowly then it won't get to its destination in time. Now, scientists have discovered a system in the sperm that acts like a gas pedal, causing the sperm to swim faster as it gets closer to the egg. The findings were published in the February issue of Cell. Researchers already knew that the speed of a sperm depends on its pH, or its internal acidity levels. The less acidic and more alkline it is, the faster it swims. They also knew that a sperm doesn't sprint at top speed for its entire trip through a woman's reproductive tract. It travels relatively slowly for the first part of its journey, and then gets

lodged in the sticky folds of the fallopian tubes, resting until another, still unknown signal raises their pH again. This initiates their final race to the egg. "It's a tough job for a sperm -- when it's deposited it has to travel a long distance to the egg sites," [said Dejian Ren, who was not involved in the new study].

"This process has been known for many decades, but how it actually happens remained a mystery" [The Scientist].

Now the researchers say they've found the mechanism that raises a sperm's pH and kicks it into high gear.

In order to increase its pH and become more alkaline, the sperm needs to jettison protons, and the US scientists have found pores on its surface which allow it to do precisely that. Dr Yuriy Kirichok, who led the research, said: "The concentration of protons inside the sperm cell is 1,000 times higher than outside. If you just open a pore, protons will go outside - we identify the molecule that lets them out" [BBC].

The scientists found that as the sperm got closer to an egg, they react to a substance called anandamide, which is present in the female reproductive tract. That is when these pores or Hv1 proton channels, open--releasing protons and making the sperm swim faster.

Gaining a better understanding of what prompts sperm to spring into action could open doors toward developing effective male contraception, or, alternatively, ways to give "slow swimmers" a jolt [Time].

And since anandamide is an "endocannabinoid," this may explain why male marijuana smokers can have fertility problems--the cannabinoids found in marijuana may mimic the effect of the natural substance.

For more info, check out this video of the researchers from the University of California in San Francisco talking about the proton activation. Related Content: 80beats: Did Researchers Really Grow Human Sperm from Stem Cells? 80beats: Older Fathers’ Sperm May Produce Children With Slightly Lower IQs 80beats: Testicles Could Yield Stem Cells Without the Ethical Complications 80beats: Men Have a Biological Clock, TooImage: iStockphoto