The field of micro- and nanorobotics has been developing for decades. We may soon begin seeing clinical trials. 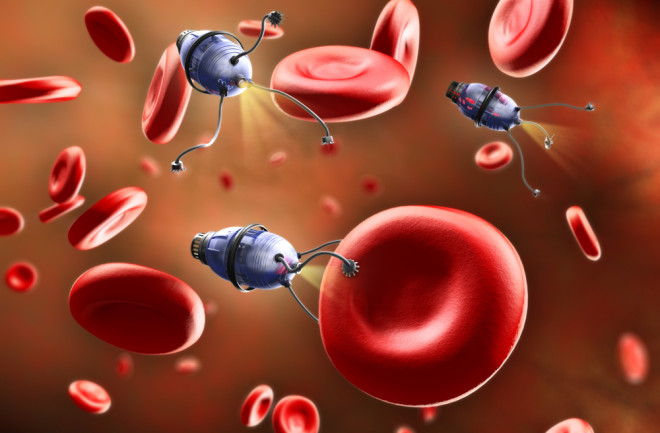 It’s often remarked of technological progress that everything keeps getting smaller (with the exception of televisions). Phones, computers, appliances and more have shrunk in size since they were first developed thanks to better design and manufacturing techniques that enable more miniature components.

But some scientists are taking that concept to the extreme, with the end goal of bringing technology to a whole new frontier: the inside of our bodies. While pacemakers, artery stents and more are commonplace, medical researchers have long dreamt of creating devices so small they could swim in our bloodstreams, opening up brand new possibilities for healing and diagnosis. Such robots would be less than a millimeter in size, and often substantially smaller. The field of nanorobotics, for example, features creations on the order of billionths of a meter.

Those of a certain age may recall the 1966 movie Fantastic Voyage, which featured a submarine crew shrunk to microscopic size to enter an ailing scientist’s body. A younger generation may think of the animated children’s series The Magic School Bus, where Ms. Frizzle shrunk the eponymous vehicle to pinpoint size to dive into an unfortunate student’s blood vessels.

While the field of medical microrobotics isn’t likely to feature tiny people, the sci-fi versions of the concept do a fair job of illustrating the basic idea. Tiny robots, just micro- or nanometers in length, could fit inside the infrastructure of our bodies, performing medical tasks with precision. Small robots could swim through blood vessels to clear dangerous blockages, or deliver anticancer drugs straight to tumors. Instead of an operation, future hospital visits might consist of a pill and a little observation.

The Doctor Is In … Your Bloodstream

The field of nanorobotics traces its heritage to a 1959 lecture by physicist Richard Feynman, in which he envisaged a world where advanced technology allows scientists to physically manipulate atoms, the building blocks of matter. Titled “There’s Plenty of Room at the Bottom: An Invitation to Enter a New Field of Physics,” the seminal talk broached the possibility that humans could build machines so small they could not even be seen.

Though it took decades for technology to catch up, scientists eventually began exploring just how small they could go when it came to robotics. The answer, it turns out, is quite small indeed. Today, researchers have created robots measured on the scale of nanometers, smaller than a red blood cell.

One of the first papers in the field was published in 1998, and it proposed the design of an artificial red blood cell made of diamond that it claimed could deliver 236 times as much oxygen to tissues as human red blood cells.

In the years since, scientists have begun tackling the unique challenges that medical microbots bring, from how to power them to preventing the body from destroying them. While we’re not yet at the point where tiny robots are involved in clinical trials, the field may be getting close. Researchers today say they are able to inject, power and control tiny robots in simulated conditions. These robots don’t look like the machines we’re used to — in fact, many consist almost entirely of tiny metal beads. But the number of applications could be vast.

A New Frontier for Robots

Creating a robot that will move around inside the human body means confronting challenges no ordinary roboticist faces. For starters, traditional batteries and motors can’t scale that small, so engineers must devise completely new methods of powering and moving robots around. And at such small scales in the body, gravity ceases to matter; instead, microrobots must fight against the raging torrent of the bloodstream, and confront the push and pull of electrostatic forces. For some of the very smallest robots, Brownian motion, or the random motions caused by thermal energy is enough to buffet their movements.

Many researchers have looked to the natural world for inspiration. Some microrobots use designs based on bacterial flagella to move. Others have co-opted biology entirely by simply integrating their machines with living cells to create cyborg-like hybrids that move about inside the body. One paper, for example, describes using bacteria like tiny motors by attaching them to plastic beads. Different microrobot designs draw on enzymes or glucose and oxygen present inside the body for power. The advantage is that such robots would essentially be swimming in their own fuel.

Another way to move a robot inside the body is use external forces. Some scientists are exploring how to use magnetic fields to move metal beads inside the body. One group reports they can control entire swarms of tiny spheres in various configurations this way, potentially maneuvering them through the body’s internal plumbing to reach a target. Another group has integrated tiny metallic beads with stem cells, which they were then able to move through narrow channels, which stood in for blood vessels.

Closing In On Medical Microbots

In another step forward, a team of researchers from China reported they were able to create microrobots capable of passing through the blood-brain barrier. They took a magnetic nanogel carrying a drug and coated it with the membrane from an Escherichia coli bacteria. When they injected the concealed nanogel into mice, cells from their immune systems called neutrophils swallowed up the nanobots, mistaking them for invading bacteria. Then, the researchers were able to use magnetic fields to move the nanobot-containing neutrophils around inside the mice’s bloodstreams, eventually crossing into their brains. The technique could be used one day to treat brain tumors, the team suggests.

The smallest medical robot to date comes from researchers at the University of Texas at San Antonio. Measuring just 120 nanometers across, the nanocomposite particles can be controlled by magnetic fields, and are small enough the researchers say they could be used to push individual cells around. That use case has yet to be realized, though it may come one day soon. But it contains glimmers of Feynman’s original vision of manipulating the building blocks of our world. As was true then, there’s still plenty of room at the bottom.