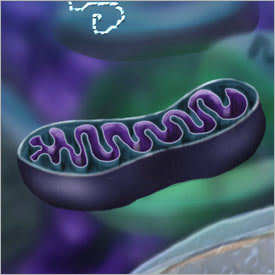 Artist's rendering of a mitochondrian, the energy-producing cellular structure affected by ARSACS

Scientists have pinpointed the cause of a rare, fatal neurodegenerative disorder called ARSACS, or autosomal recessive spastic ataxia of Charlevoix-Saguenay

. The disease is due to defects in neuron's mitochondria

, the bit of biological machinery that generates energy for the cell---a structure known to be affected in Parkinson's, Alzheimer's, and other neurological diseases, as well. ARSACS was first observed in the descendants of a small group of 17th century French settlers

who made their homes near the Charlevoix and Saguenay rivers in what is now Quebec, and has since been seen worldwide. But its incidence remains unusually high in that particular French Canadian community, with 1 in 1,500 to 2,000 people developing ARSACS and 1 in 23 people unaffected genetic carriers of the disease. The first symptoms of ARSACS appear in early childhood, often as a two- or three-year-old learns to walk, a skill that---because t

he disease primarily affects the cerebellum

---those suffering from ARSACS never master. As the disease progresses, it leads to muscle weakness, slurred speech, and difficulty coordinating or controlling movement

. People with ARSACS require wheelchairs by around age 40; their life expectancy is only a decade beyond that. In 2000, researchers traced the disease to mutations in a specific gene

that codes for sacsin, an enormous protein whose function remained utterly mysterious. But in a study published today in PNAS and presented in December at the American Society for Cell Biology meeting

[pdf], scientists bred mice without the sacsin gene, to investigate the protein's role. They found that the mitochondria in the mice's neurons didn't work properly without a functioning version of sacsin, and that neurons in the cerebellum began to die off, paralleling what happens in humans with the disease. Since scientists have also found mitochondrial malfunctions in other, widespread disorders, research into and treatments for those diseases may help those with ARSACS, the researchers say

---and conversely, research into rare conditions, which is often overlooked or underfunded, may provide insight into all-too-common ailments such as Huntington's, Alzheimer's, and Parkinson's diseases.