ReDiscover: The Genetics of Sexuality Broadens

Experts continue to hunt for variations linked to homosexuality. 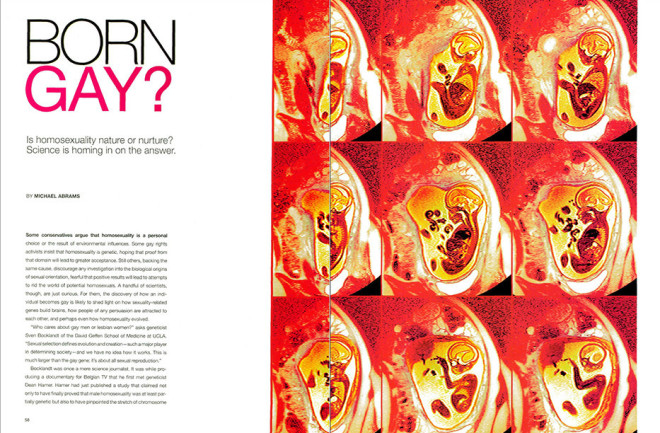 In 1993, geneticist Dean Hamer co-published a study claiming male homosexuality was at least partially genetic, and he identified the chromosome segment where one of the relevant genes was located. It was just some of the research on the controversial topic that Discover unpacked in a June 2007 feature article, “Born Gay?”

Since then, researchers from Northwestern University and NorthShore University HealthSystem Research Institute in Evanston, Ill., have replicated Hamer’s results in a larger, more robust paper — and they’re working on a more sophisticated study.

One problem? “Linkage studies implicate pretty broad regions, so there’s still a bit of work to be done to narrow it down,” he says.

So Sanders’ current research uses the same brother pairs, but it relies on a genomewide association study, a newer analysis that looks at hundreds of small genetic variations at a time. The association study matches genetic variants with a trait by looking at large groups of people with that trait and then compares how their genomes differ from a group without the trait. The analysis helps researchers find a genetic association even when there’s no genetic marker to guide them.