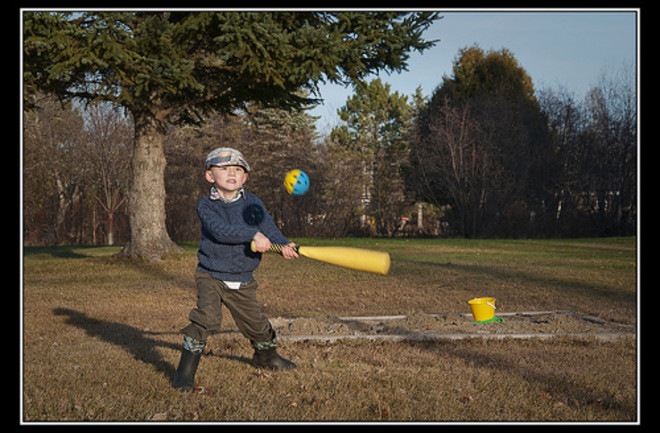 Photo: flickr/DaMongManWe've all been told to "keep your eye on the ball" when learning baseball. Despite this sage advice, I was never able to actually hit the ball. Until now, I thought this was my fault (perhaps because I always performed "duck and cover" as the ball approached). But it turns out that really good baseball players don't actually watch the ball throughout its flight. In fact, baseballs can move fast enough to make that impossible. The authors of this study measured what elite players actually look at when at bat. They found that the batters turn their heads so as to be able to watch the ball, but instead use their eyes to predict where the ball might hit their bat. So maybe it wasn't actually my fault I was so terrible at baseball. (Please, just let me think that. Thanks.)The head tracks and gaze predicts: how the world's best batters hit a ball. "Hitters in fast ball-sports do not align their gaze with the ball throughout ball-flight; rather, they use predictive eye movement strategies that contribute towards their level of interceptive skill. Existing studies claim that (i) baseball and cricket batters cannot track the ball because it moves too quickly to be tracked by the eyes, and that consequently (ii) batters do not - and possibly cannot - watch the ball at the moment they hit it. However, to date no studies have examined the gaze of truly elite batters. We examined the eye and head movements of two of the world's best cricket batters and found both claims do not apply to these batters. Remarkably, the batters coupled the rotation of their head to the movement of the ball, ensuring the ball remained in a consistent direction relative to their head. To this end, the ball could be followed if the batters simply moved their head and kept their eyes still. Instead of doing so, we show the elite batters used distinctive eye movement strategies, usually relying on two predictive saccades to anticipate (i) the location of ball-bounce, and (ii) the location of bat-ball contact, ensuring they could direct their gaze towards the ball as they hit it. These specific head and eye movement strategies play important functional roles in contributing towards interceptive expertise."

Panel A shows the three individual angles, and Panel B shows the three relative angles used to measure the movement of the eyes and head relative to the ball, and the eyes relative to the head. Individual angles are subtended by direction of the ball (yellow), gaze (blue), and head (red) at the eye (in degrees) relative to the initial direction at ball-release (dotted line shows the case where all three angles coincide at ball-release). In all cases a negative angle refers to a downward direction. Panel B shows the experimental set-up; in this case showing a positive gaze-ball angle (gaze located ahead of ball); negative head-ball angle (direction of head lagging behind ball); and positive gaze-head angle (gaze is ahead of head direction).