Rats, Like (Some) People, Obey the Law of Quid Pro Quo 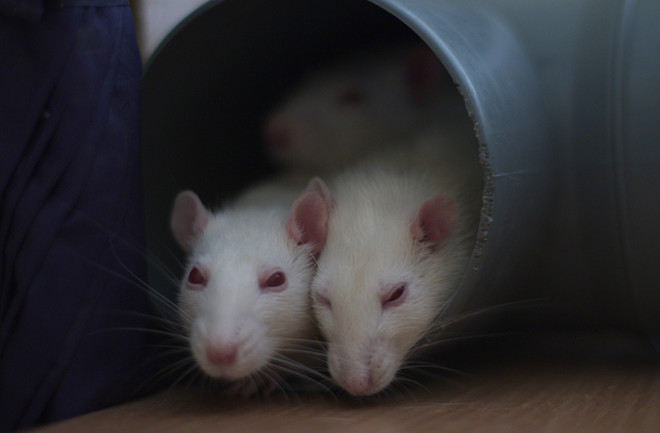 Image: Flickr/Tatiana BulyonkovaLike most animals that thrive in cities, rats get a bad rap. We even use the word "rat" for nasty people, particularly those that go behind your back. But this study suggests that rat society may not be so bad after all. By placing rats in special cages that allow them to give food only to another rat (not themselves), these researchers found that rats will trade grooming for help with getting food. In fact, the more help they got, the more grooming they gave. Maybe it's time to update the old idiom: "I'll scratch your back if you scratch mine... or hook me up with some chow."Reciprocal Trading of Different Commodities in Norway Rats. "The prevalence of reciprocal cooperation in non-human animals is hotly debated. Part of this dispute rests on the assumption that reciprocity means paying like with like. However, exchanges between social partners may involve different commodities and services. Hitherto, there is no experimental evidence that animals other than primates exchange different commodities among conspecifics based on the decision rules of direct reciprocity. Here, we show that Norway rats (Rattus norvegicus) apply direct reciprocity rules when exchanging two different social services: food provisioning and allogrooming. Focal rats were made to experience partners either cooperating or non-cooperating in one of the two commodities. Afterward, they had the opportunity to reciprocate favors by the alternative service. Test rats traded allogrooming against food provisioning, and vice versa, thereby acting by the rules of direct reciprocity. This might indicate that reciprocal altruism among non-human animals is much more widespread than currently assumed." Related content: How can you tell if a rat is smiling?Dog poop, dead rats, and maggots: this study’s got it all!Do rats like jello shots? You betcha!