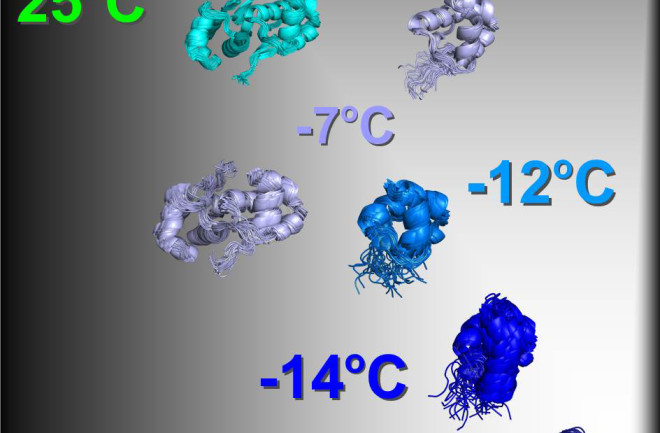 “Snapshot” of the unfolding of CylR2 protein from Enterococcus faecalis. If the protein is cooled from 25°C to -16°C, it successively breaks down into its two identical subunits. The latter are initially stable, but at -16°C they form an instable, dynamic protein form, which plays a key role in folding. © Zweckstetter, Max Planck Institute for Biophysical Chemistry & German Center for Neurodegenerative Diseases ­­Proteins — tools of living cells — can’t do their job if they’re not in shape. Literally. And a new study is the first to image the various stages of a protein's undoing, which will lend valuable insight to treatment of diseases such as Alzheimer’s and Parkinson’s. Those are just two of the diseases caused by proteins that are misfolded — their amino acid chains are not arranged correctly, resulting in a misshapen three-dimensional structure. When misfolded, these proteins don’t work and, in the case of diseases such as Alzheimer’s, gunk up the brain and eventually destroy nerve cells. Understanding how proteins fold is crucial to developing ways to prevent and treat these diseases. Previous attempts to document the process have involved heat or chemicals, creating conditions under which the proteins quickly unraveled and thus limiting observation of the in-between states. Now, however, using below-freezing temperatures and nuclear magnetic resonance (NMR) spectroscopy, the act of a protein unfolding has been slowed down enough to be visualized at atomic resolution for the first time. A team of scientists in Germany and Poland “filmed” the act of unfolding by the protein CylR2, chosen because it is made of two identical subunits, which the team believed would make it easier to visualize. But forget Hollywood: the protein made its screen debut in a lab, not a studio, as chemists cooled the protein from 77 degrees Fahrenheit to 3 degrees F (25C to -16C), using NMR spectroscopy to capture its appearance at seven intermediate stages. The team was able to identify the point of the unfolding process when the protein’s subunits lose their stability: the “trigger,” according to structural biologist Markus Zweckstetter, for possible misfolding when the protein is originally created. Zweckstetter and his colleagues, who published their findings in the journal Nature Chemical Biology, believe their findings will provide a new way to study how proteins assume their three-dimensional shapes and why they sometimes misfold, answering one of the big questions in understanding disease.