Promising Cystic Fibrosis Drug Targets the Cause, Not the Symptoms 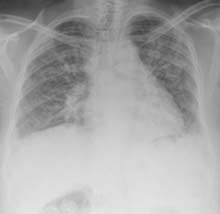 A study of an experimental drug from the company Vertex, called VX-770, successfully reduced lung problems in CF patients, and the company hopes to try for approval of the drug later this year. If all goes well, doctors may soon have their first drug to treat the cause of this devastating disease, instead of just combatting the symptoms. Cystic fibrosis is a genetic disease that impairs lung and digestive function. In particular, the normally thin layer of mucus in the lungs thickens up and impairs breathing; this happens because patients have a faulty version of a protein that helps clear mucus.

About 1800 different mutations in the cystic fibrosis transmembrane conductance regulator (CFTR) gene have been implicated in the disease. The gene encodes a molecular channel that shuttles chloride ions across cellular membranes, and people with two mutated copies develop mucus-filled lungs susceptible to infection. Few patients live to see their 30s. In 1989, CF became the first disease pinned to a specific gene mutation, without the benefit of knowing the protein first. [Nature]

This newest test was a Phase III trail

of Vertex's drug, which was funded in part by the Cystic Fibrosis Foundation

. The treatment goes after one major genetic mutations that causes the disease, called G551.

The Strive study tested the drug in 161 patients with the mutation and showed that a measure of air exhaled, called forced expiratory volume, increased after 24 weeks and 48 weeks in comparison to placebo.... In the primary goal of the trial, the drug showed an improvement in forced expiratory volume of 10.6% in those on the drug through 24 weeks and 10.5% through 48 weeks. It also showed improvement in other measures, including weight gain, fewer respiratory symptoms and reduction of salt in sweat, a symptom of the disease. Patients on the drug were 55% less likely to experience a pulmonary exacerbation, or worsening of the disease that requires antibiotics, the company said. [Wall Street Journal]

. Later this year, Vertex says it plans to release data on the success of treating that mutation with a combination of VX-770 and another drug, VX-809. For now, researchers are celebrating this first success at treating the disease and not merely the symptoms.

"These are potentially game-changing data in cystic fibrosis," Mark Schoenebaum, an analyst at ISI Group, said in a research note. "VX-770 is the first drug to show good data in a Phase III that actually modifies the disease by binding to a defective protein and fixing it." [Reuters]

Related Content: DISCOVER: Cystic Fibrosis: The Promise of a Cure

(when we covered the efforts way back in 1994) DISCOVER: The Second Coming of Gene Therapy