It's a fun fact that there are an order of magnitude more bacterial cells in your body than your own cells. Not only that, it's well known that we wouldn't flourish, let alone survive, without our gut "flora," which digest material which would otherwise pass through out system. Not only are microbes good for us, but they're also bad for us. The evolutionary flexibility of microbial pathogens is one of the major arguments for why sex exists among multiceullar species: it allows them to adapt to rapidly fluctuating disease pressures. Therefore, obviously the ecology of multicellular organisms' microbial flora is essential to properly characterize. One element of the project involves genomics. This is not so easy for microbes because we don't have the reference sequences of most of these organisms. We rely mostly on species which are easy to culture, and that does not include most lineages in the wild. That being said, there are workarounds, such as looking at the 16S rNA sequence, which is strongly constrained in bacterial lineages (i.e., it can serve as a "clock" to measure divergence of very deeply separated lineages). With that, a new paper, Promiscuity in mice is associated with increased vaginal bacterial diversity:

Differences in the number of sexual partners (i.e., mating system) have the potential to exert a strong influence on the bacterial communities present in reproductive structures like the vagina. Because this structure serves as a conduit for gametes, bacteria present there may have a pronounced, direct effect on host reproductive success. As a first step towards the identification of the relationship between sexual behavior and potentially pathogenic bacterial communities inhabiting vital reproductive structures, as well as their potential effects on fitness, I sought to quantify differences in bacterial diversity in a promiscuous and monogamous mammal species

. To accomplish this, I used two sympatric species ofPeromyscus rodents—Peromyscus californicus and Peromyscus maniculatus that differ with regard to the number of sexual partners per individual to test the hypothesis that bacterial diversity should be greater in the promiscuous P. maniculatus relative to the monogamous P. californicus.

As predicted, phylogenetically controlled and operational taxonomic unit-based indices of bacterial diversity indicated that diversity is greater in the promiscuous species. These results provide important new insights into the effects of mating system on bacterial diversity in free-living vertebrates, and may suggest a potential cost of promiscuity. 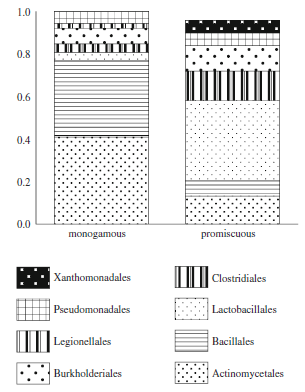 These two species are sympatric and exhibit very different behaviors. Sympatric means that they aren't geographically separated, so they are subject to the same environmental conditions. Rather, their distinctions on the species level seem to be due to behavior, in this case, the number of sexual partners of females. This then is a nice test for assessing the relationship of microbial diversity in the vagina as a function of partners. I suspect a priori you'd expect a positive relationship. And that's what the author found. He presented a diversity index, but the results are rather intelligible visually. You can see clearly that the promiscuous species is characterized by a greater range of species richness than the monogamous one. There are some studies of metagenomics of bacterial communities in humans. But to my knowledge it doesn't look like there are any which have attempted to correlate number of sexual partners to diversity of vaginal flora. This is possible very important as a long term issue. The evolutionary biologist Paul Ewald has been reporting that there is a connection between history of infection and many late in life diseases, such as cancers. Mike Snyder had Stanford has been tracking his own biomarkers in extensive detail for several years, and has indicated that his own onset of Type II Diabetes was probably triggered by an earlier infection. These inferences were only possible because of his extremely rich personal data set, part of a broader project in his laboratory. But, it might give us a window into the more precise individual etiologies of diseases. Citation: Naturwissenschaften. 2011 Nov;98(11):951-60. Epub 2011 Oct 1