Pretending to have superpowers actually changes you. 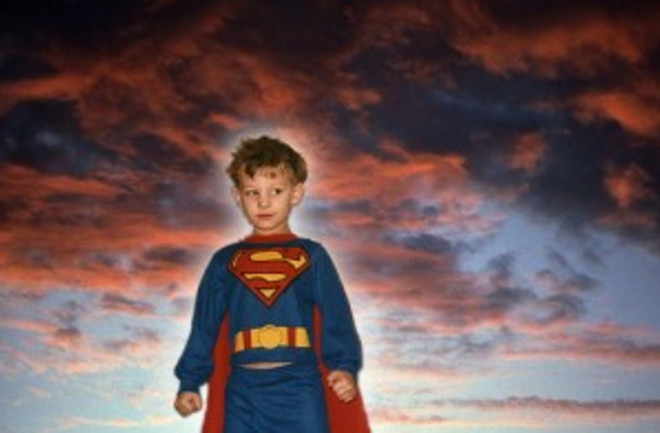 What happens when someone pretends to have superpowers? Obviously, they don't actually gain superhuman strength, but maybe it makes them less vulnerable in non-physical ways. This study set out to test whether pretending to have superpowers changes how people deal with being socially excluded or rejected. As the authors put it: "Whereas owning such powers in reality would certainly be a life-changing experience, it is possible that simply possessing superpowers in one's imagination can be enough to defeat some inner demons." Be sure to read the fun passages that the researchers had the participants (gathered using mTurk) read to help them in their role-playing.

Superman to the rescue: Simulating physical invulnerability attenuates exclusion-related interpersonal biases. "People cope with social exclusion both by seeking reconnection with familiar individuals and by denigrating unfamiliar and disliked others. These reactions can be seen as adaptive responses in ancestral environments where ostracism exposed people to physical dangers and even death. To the extent that reactions to ostracism evolved to minimize exposure to danger, alleviating these foundational concerns with danger may lessen people's need to cope with exclusion. Three studies demonstrate how a novel physical invulnerability simulation lessens both positive and negative reactions to social exclusion. Study 1 found that simulating physical invulnerability lessened exclusion-triggered negative attitudes toward stigmatized groups, and demonstrated that perceived invulnerability to injury (vs. imperviousness to pain) accounted for this effect. Studies 2 and 3 focused on another facet of social bias by revealing that simulating physical invulnerability lessened the desire for social connection." Here is a pretty awesome quote from the materials and methods: "Forty-one mTurk participants completed a guided visualization task in which they imagined themselves acquiring a particular superpower. Participants in the invulnerability condition were asked to imagine the following scenario: “On a shopping trip, you wander into a strange store with no sign out front. Everything is dimly lit and the shopkeeper calls you by name even though you have never seen him before. He tells you to come close and he says to you in a weird voice ‘I have decided to give you a gift. Tomorrow, you will wake to find that you have a super-power. It will be an amazing ability, but you must keep it absolutely secret. If you purposely tell anyone or show off your power, you will lose it forever.’” They then read: “That night, you have a hard time sleeping, but when you wake, you find that you do indeed have a super-power. A glass falls on the floor and without meaning to you accidentally step on the broken glass. It doesn't hurt you at all though, and you realize that you are completely invulnerable to physical harm. Knives and bullets would bounce off you, fire won't burn your skin, a fall from a cliff wouldn't hurt at all. You don't have any other super-powers though (for example, no super-strength). Everything else is exactly the same as it was yesterday.” In the control condition, they read a similar passage, except they imagined being able to fly instead of being invulnerable (see Appendix A). Participants were then explicitly instructed that they did not have any other superpowers and they could not reveal their powers to anyone (to minimize self-presentation issues). To make the mental simulation more salient, they were also asked to write briefly about what it would feel like to have the superpower and how they would use it in their own lives."

Thanks to Thomas for the tip! Related content: Discoblog: NCBI ROFL: It's a bird! It's a plane! No…it's silly research!