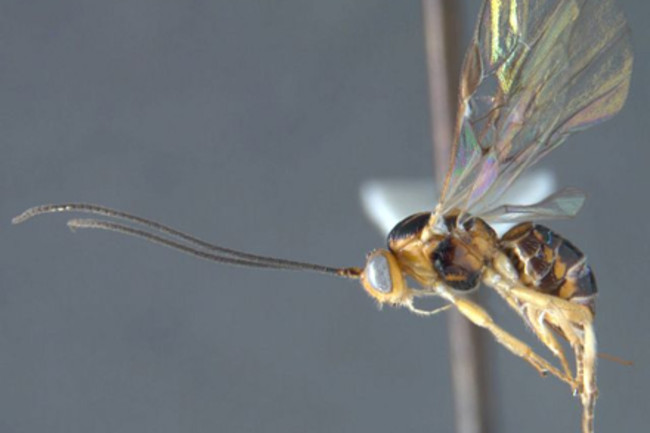 I've been quietly watching scientists flip out about Sarah Palin's recent scoff about the US funding research on fruit flies in Paris--even Christopher Hitchens is now championing those fine insects today in Slate. But, thanks to a little grant-digging by PZ Myers, I discover that, in fact, all this brouhaha comes down to those dear friends of this blog, parasites. Frankly, if you wait long enough, everything comes down to parasites. A lot of people thought at first that Palin was dismissing basic research on Drosophila melanogaster, which has yielded lots of profound insights about human biology. Palin herself hasn't cleared up the issue, but on further reflection, the consensus is that she was complaining about research on the olive fruit fly. That insect is a nasty crop pest in the US. It's also a pest in Europe, where people have been studying ways to control it--hence the need for funding research there. So--how do they plan to control these pests? By unleashing a vicious, brutal death on their babies! (Apologies to any insect-rights people out there...) Pests often become pests by getting shipped to new places where they can thrive without all the parasites and pathogens that kept them in check back home. So a promising way to rein them in is to go back to where they were evolved, and find some really nasty parasites that evolved with them. Happily, scientists have found a wasp in Africa, where the olive fruit flies came from, that appears to be specialized to lay their eggs only in the larvae of the flies. The wasps then drink up the larvae's bodily fluids and crawl out, leaving behind the dried up corpse of their host. So the scientists have shipped the wasps to California and done a lot of testing on the them (you have to make sure they won't go off and start killing harmless native insects). Their goal is to shower the wasps across the olive fields of America. This may seem outlandish, but it's actually a fairly well-developed technique for controlling pests. In my book Parasite Rex, I describe a devastating outbreak that threatened Africa's cassava plant--a staple for millions of people across the continent. The cassava were being wiped out by mealybugs from South America. In the late 1980s, entomologist Hans Herren and his colleagues found a South American wasp and brought it to Nigeria. Then he had to figure out how to get the wasps to their hosts.

The wasps were put to sleep with carbon dioxide and then lodged in cylinders of foam rubber, 250 in each one, which were loaded into a magazine that had been custom-built for Herren at an Austrian camera factory. As the pilot passed over a field, Herren intended for him to be able to drop the wasps precisely. "It was like in fighter aircrafts. You know when to drop the bomb by looking at the crosshairs. We tried this over a swimming pool in Ibadan. We'd fly over and drop the wasps. At 180 miles per hour, we were able to get them in there."

Once Herren figured out how to drop his parasitic payload precisely, he started showing millions of wasps on African farms. After a few years, Herren had driven down the mealybugs to tiny numbers.

So please, my fellow Americans, think kindly on parasites this election year. If handled right, they can save your dinner.