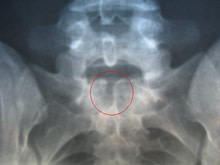 The birth defect spina bifida is a devastating condition, often leading to a life of cognitive disability and even paralysis. But for a new study in the New England Journal of Medicine, doctors have shown that fetal surgery conducted in utero, though tricky and carrying some risk, can help to fight the ravages of this affliction.

The study focused on women carrying fetuses diagnosed with myelomeningocele, the most common and most severe form of spina bifida, in which the spinal cord bulges outside the spinal column. The condition can result in lifelong cognitive disabilities, fluid on the brain, bowel problems and paralysis. Typically surgeons operate on such babies within a few days of birth. [Science News]

The option of performing surgery

before birth—sealing the opening in the spinal column while the fetus is in the womb—has actually been around for more than a decade.

But no one knew if operating before birth was preferable to operating after. What they did know was that fetal surgery had a number of complications, including causing premature birth, which in some cases killed babies who would otherwise have survived. [ScienceNOW]

Now more results are in. Comparing 78 babies who received the prenatal procedure to a control group of 80 babies who received the procedure just after birth, the researchers found that 42 percent of the prenatal surgery group learned to walk without walking aids, as opposed to just 21 percent from the control group. Also, many fewer required shunts—passages created to drain fluid from the brain.

The spina bifida procedure was considered beneficial enough that an independent safety monitoring board stopped the study early so babies scheduled to receive surgery after birth could have access to prenatal surgery. But there were medical downsides for the women and infants: greater likelihood of being born several weeks earlier than the postnatal group, related breathing problems, and thinning or tearing at women’s surgical incisions, requiring Caesarean sections for later births. [The New York Times]

So while experts told the New York Times

that this procedure isn't quite a "home run" and say that the secondary risks need to be assessed, it's still a heartening advance against spina bifida. Related Content: 80beats: Fetal Stem Cell Trial Starts for Stroke Patients, Spinal Cord Patients up Next

80beats: Could a Fetus’s Genetic Disorder Be Cured by Mom’s Stem Cells?

80beats: Doctors Work Towards Womb Transplants–But Are They Ethical?

80beats: In Rare Cases, Cancer Can Pass From Mother to Unborn Child