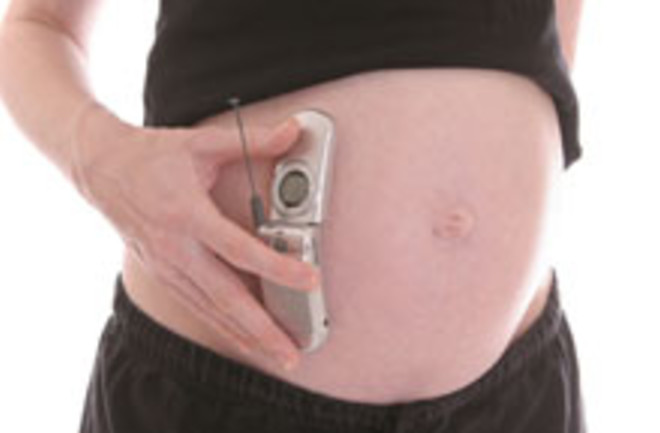 If requiring stores to label their cell phones with radiation-output levels wasn't enough, San Francisco has found a new way to revel in cell phone hysteria: Now one of its trendy maternity boutiques sells radiation-shielding maternity clothes. These clothes are specifically designed to shield their little unborn hipster babies from computer and cell phone radiation. Radiation-shielding maternity clothing has been popular in China for years, but a young company is now marketing its line of Belly Armor directly to San Francisco's expectant mothers. The clothing, which start at $59 for a T-shirt, is made by a company called RadiaShield, whose website encourages expectant mothers to "protect their child within" from the radiation of daily lives. Fact check: most of the radiation that a cell phone emits is actually a low-frequency, non-harmful type of radiation called non-ionizing radiation. It doesn't contain enough energy to remove electrons from an atom, unlike higher-energy, higher-frequency, known-to-be harmful radiations like x-rays and UV light. As our daily exposure to these non-ionizing radiations have increased with the advent of personal electronics, people have started to worry that this additional exposure may have health implications. Though many studies of non-ionizing radiation have shown it to be harmless (and in one strange study, possibly even beneficial), not all expectant mothers are reassured by these studies. Laura Riley, medical director of labor and delivery at Massachusetts General Hospital, told TIME her point of view on the product:

... products like Belly Armor prey on consumers' unsubstantiated fears. "There are no conclusive studies that have shown that low radiation from everyday devices is harmful to anyone, much less to a pregnant woman," Riley says.

The fabric used to make these T-shirts and blankets, which RadiaShield claims is woven with 82 percent silver fibers, blocks most wavelengths of the non-ionizing radiation emitted by electronic devices. With its typical subtlety, The Register makes the point that while the Belly Armor does protect from the small range of low frequency radiation we encounter from our cell phones and wifi computers, there are still other types of radiation being emitted in our homes that the fabric doesn't protect from:

OK, so wear a Belly Armor T-shirt, or drape yourself in multiple blankets. But you're still not out of the woods, actually: look up there in the corner of the ceiling! My God! The burglar-alarm MOTION DETECTOR is quite possibly BEAMING OUT DEADLY RAYS at 10.5 GHz - WELL OUTSIDE the tested band in which Belly Armor is known to work!

The best advice so far also comes from The Register:

But frankly, if you're the sort of person who is seriously considering the purchase of Belly Armor, you probably already own and wear a hat made of tinfoil. Why don't you simply wrap a length of trusty kitchen aluminium round your midsection, too?

80beats: Can You Fear Me Now? Cell Phone Use Not Linked to Brain Cancer

Discoblog: Worst Science Article of the Week: Use a Cell Phone, Damage Your Baby