Singapore is a racially diverse society, so there's a natural pool of diversity from which one can draw for study of human variation. The Han majority of Singapore derive predominantly from Fujian in southeast China. The Indians are mostly from the southern regions dominated by Tamils or Telugus, but there are large minorities from all over the subcontinent. Finally, the Malay category is really an amalgam of peoples of Southeast Asian Muslim origin, from native Singaporean Malays, to Malaysian Malays, to immigrants from Indonesia. Singapore Genome Variation Project: A haplotype map of three South-East Asian populations:

The Singapore Genome Variation Project (SGVP) provides a publicly available resource of 1.6 million single nucleotide polymorphisms (SNPs) genotyped in 268 individuals from the Chinese, Malay and Indian population groups in South-East Asia. This online database catalogues information and summaries on genotype and phased haplotype data, including allele frequencies, assessment of linkage disequilibrium (LD) and recombination rates in a format similar to the International HapMap Project. Here we introduce this resource and describe the analysis of human genomic variation upon agglomerating data from the HapMap and the Human Genome Diversity Project, providing useful insights into the population structure of the three major population groups in Asia. In addition, this resource also surveyed across the genome for variation in regional patterns of LD between the HapMap and SGVP populations, and for signatures of positive natural selection using two well-established metrics - iHS and XP-EHH. The raw and processed genetic data, together with all population genetic summaries, are publicly available for download and browsing through a web-browser modeled with the Generic Genome Browser.

The sample is equally divided between the three populations. They didn't find anything too novel in regards to selection and structure, so I'll present some the PCA charts reformatted for clarity. 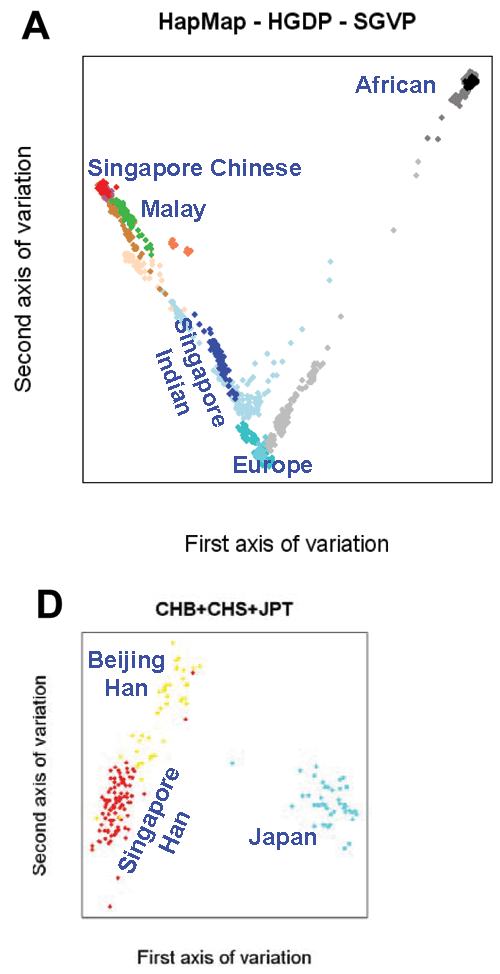 Nothing too surprising in panel A, but panel D is somewhat interesting. Note that Singaporeans differ from the HapMap sample of Chinese from Beijing. This seems like a clear case of regional differences, as I noted above the Chinese of Singapore derive from Fujian province by & large, while most of the Beijing Chinese are probably from northern China. I wonder if some of the Singapore Chinese at the "bottom" of the chart are actually of Baba Chinese background and so have a great deal of Malay ancestry. Now here's another chart which focuses on East Asian populations. I've added labels and a map. 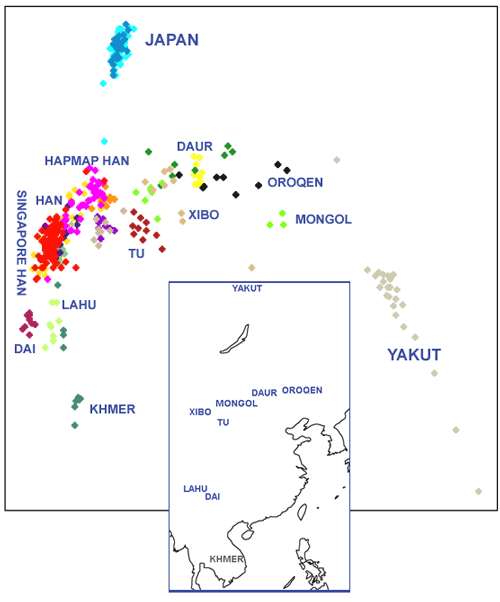 Note the variation among nomadic population in northern China. Why? I suspect these are groups which have been mobile in the recent past, so no guarantee that where they are now is where they always were.