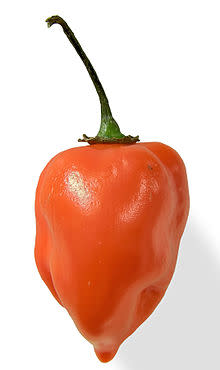 As some of you know, I have a problem. An addiction that is. For most of the year I stock up on fresh habanero pepper. Usually I try to limit myself to 1-2 peppers per meal...but when not in the company of others who may civilize me I can lose control and eat more than half a dozen in a sitting. After the first few peppers they just don't taste as spicy, and I suppose psychologically I am under the illusion that enough peppers will bring back the pleasure high of a few moments earlier. I developed this habit not through cultural inculcation. Rather, when I went off to college and no one supervised me I began to eat more and more peppers, and developed an extremely high threshold of tolerance. By the end of college I began to raid my parents' thai peppers at home to the point where they complained that I always left their stock depleted before going back to school. At this point I can drink tabasco sauce like gatorade. But the different parts of the gastrointestinal system adapt differently. When I "habanero gorge" I develop extreme pain in my bowels in a few hours, and of course there are issues the next day. Over the years I've poked around the literature on possible correlations between pepper consumption and stomach cancer, or the anti-pathogenic properties of peppers. I'm pretty sure I'm well beyond the limit of normal consumption in any of these studies. My primary motivation in consuming peppers is pure hedonism, as can be attested by the fact that my consumption is constrained by the presence of others. But there are clear social consequences to eating extremely spicy food. People take notice when you pile on crushed read peppers onto pizza, or pull out a habanero at In-N-Out Burger. At nice restaurants you sometimes get well known for being the guy who likes the habanero paste lathered onto his beef, to the point where new servers might drop by to gawk. There can be a clear element of social signalling in consuming very spicy foods. In short, people can think you are a "badass." Of course actually I'm a cheerful and self-effacing individual! (granted, with a casual tendency to verbally bludgeon people) I thought of this when Amos pointed me to this report in Discover on a hot sauce made from Trinidad Scorpion Butch T pepper. According to some reports this pepper is about 1 order of magnitude spicier than habaneros! (in scoville units) I'm not totally unfamiliar with such levels of spice. A few years ago I tried a bunch of hot sauces, and I also ordered pure capsaicin, the active ingredient in peppers. If you want a hot sauce that is very hot, I'd go with Dave's Insanity. The pure capsaicin was crazy spicy. Really I got overwhelmed with one drop. What you're really supposed to do with that stuff is make sauces with a drop here and there. I did do that. But what I prefer is to take fresh habaneros and make sauce out of that. A sauce shouldn't just be diluted spice, it should have other flavors. I like habaneros, cilantro, oil, vinegar, and water. It seems that beyond a certain level of heat you can't really experience any more sensation. The spicier the quality, the less quantity you can take in. So the subjective feel of a tiny drop of capsaicin can be equivalent to a whole habanero, despite there differences on the scoville and physical scales. Below are two charts showing differences on the scoville scale. I grabbed the data from Wikipedia (with some averaging): 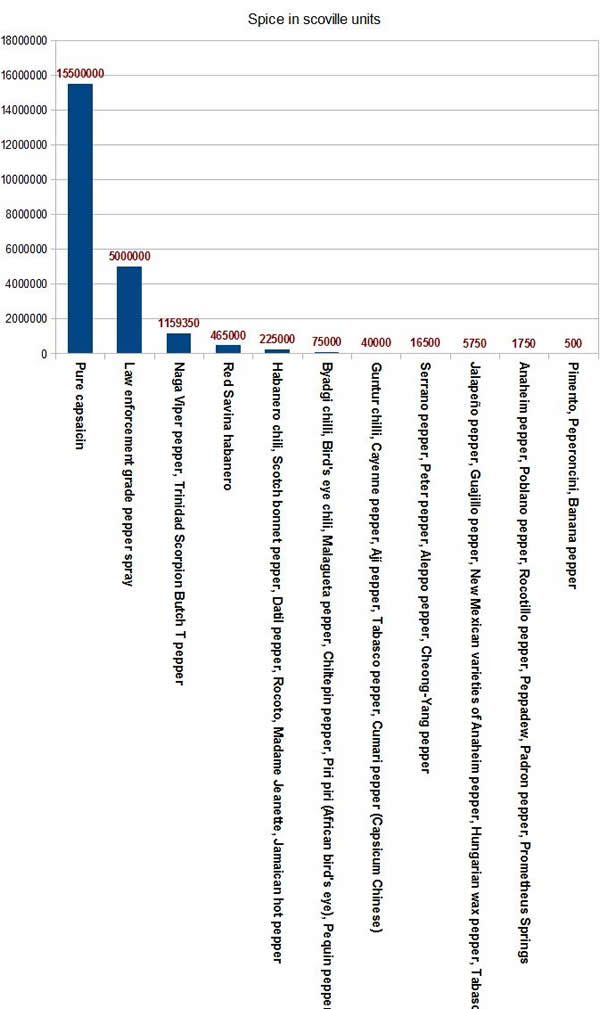 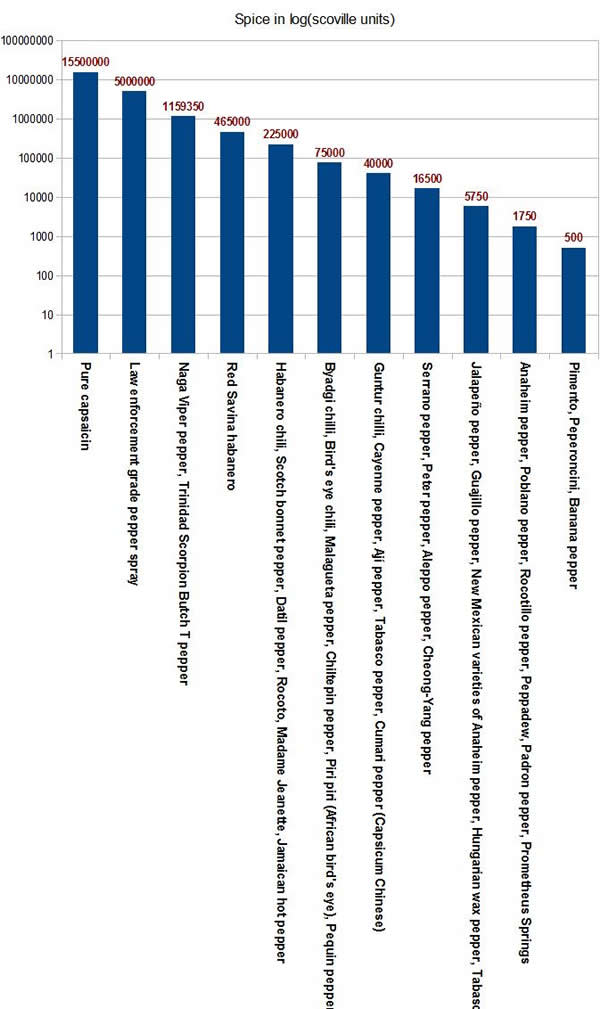