Plastic Tea Bags Release Billions of Microplastics Into Every Cup 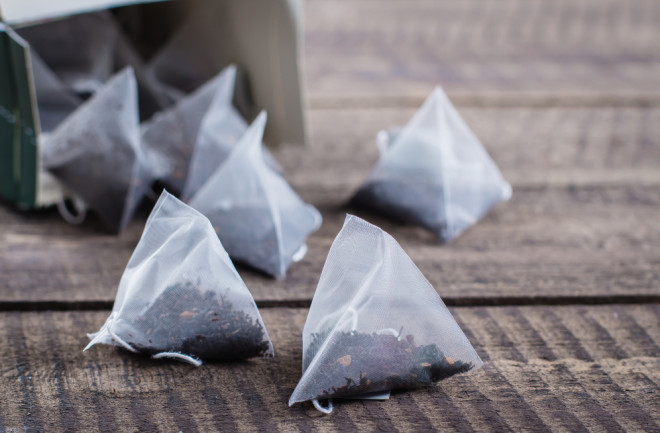 Tea bags made of plastic can release billions of microplastics into our bodies. (Credit: AnikonaAnn/Shutterstock)

There’s a new trend in tea — out with the old, flat paper tea bags and in with the pyramid-shaped mesh bags that allow bigger leaves extra breathing room. The bags, which have been around since at least 2006, are sometimes called “silken” sachets. They can be made from hemp, corn-based plastics, nylon or PET (polyethylene terephthalate). But most often it’s one of the latter two: plastics.

But research out this week in Environmental Science & Technology reveals that plastic tea bags are doing a lot more than holding on to your tea. When you steep them in hot water — AKA make tea — they break down just enough to release billions of plastic microparticles right into your beverage.

Microplastics are in the news a lot lately, after showing up in bottled water and Arctic snow and table salt and a wide range of organisms. But these studies turned up much smaller concentrations of the plastics. The World Health Organization estimates that bottled water probably has tens to hundreds of particles per liter — just over two pints.

Chemical engineer Nathalie Tufenkji says she got the idea for the study after ordering a cup of tea from a coffee shop one day on her way to work.

“I looked down and said to myself, this teabag looks like plastic. And I thought, that’d be pretty ridiculous, putting plastic in hot water — I wonder if it’s releasing plastic into the actual tea,” she recalls. “I drank the tea, kind of hesitantly…”

Tufenkji had already been studying microplastic pollution, so she and graduate researcher Laura Hernandez got to work on some preliminary tests. Hernandez went to coffee shops and grocery stores to buy some tea bags to test in the lab.

“We were thinking maybe we’d see 100, or 1,000 particles, but we were absolutely blown away when we saw that there were billions of particles,” says Tufenkji. “That’s when we said, okay, this is big. We need to finish this and make sure we do this well.”

They went back and bought hundreds of tea bags.

How to Count a Billion Particles

The study design was straightforward. They picked four brands at random that had plastic-based tea bags: two made of nylon, and two made of PET. They took out the tea, rinsed the bags in pure water, and steeped the empty bags for the time and temperature required to make tea (five minutes at 203 degrees Fahrenheit.)

When they examined what had steeped out of the empty teabags, they found plastics. Lots and lots of plastics.

To further complicate matters, tea can contain small amounts of metals and metalloids like aluminum, lead and chromium. And micro- and nano-plastics are known to be able to absorb things like heavy metals. When the researchers looked to their microplastic “tea” steeped from the bags, they indeed found that metals from the tea had glommed on to the microplastics from the bags.

Time for a Tea Party?

To test for some of the potential adverse effects of these plastics, the researchers exposed a model organism called a water flea, or Daphnia, to different concentrations of the microplastics leached from the tea bags.

The more microplastics the Daphnia were exposed to, the more of an impact it had on them. They swam more erratically, and more in general, which demonstrated that they were stressed out. And it happened with plastics both from the PET and the nylon bags, as well as with and without the tea-metals removed. The worst for the Daphnia were the PET microplastics with the metals leached from the tea.

When the team, in collaboration with McGill researcher Hans Larsson, did X-ray CT scans of the Daphnia, they learned that exposure to the microplastics caused their body shapes to change, too.

“There’s been very, very, very little research done on human health and toxicity of microplastics,” says Tufenkji. “Especially [of] ingesting, and at these levels.”

“If the product does stay on the shelf, then I think there’s a need to really push and do some more thorough toxicity studies,” she says.

Tufenkji didn’t reveal which brands her team tested in the study, and most brands don’t include on their packaging what their bags are made of.

In general, many of the tea bags that are made of plastic seem to be higher-end brands, are often pyramid-shaped rather than flat and use language like “silken” and “mesh.”

If you’re worried about plastic in your tea, stick with paper tea bags or brewing with loose leaf.

Tufenkji says a lot of her friends didn’t even realize the “fancy” tea bags were made of plastic. That might explain how these products have gained traction in a society that’s currently fighting against other single-use plastics, like straws and bags.

“It’s so crazy. I mean, why? My big question is why. Why would you make this out of plastic? You’re putting it into boiling water. It was just mind blowing to me,” she says. “People need to know what they’re ingesting.”