People can sniff out criminals...literally. 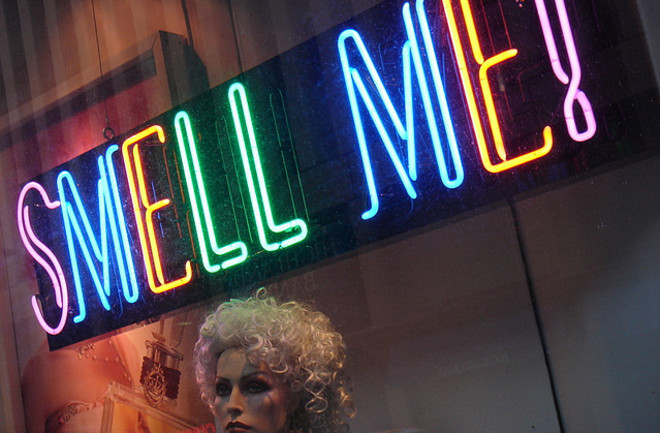 Photo: flickr/tadsonbusseyPolice have been using lineups for years to help eyewitnesses identify suspects in crimes. But what if you closed your eyes or it was too dark to see what was going on? Well, according to this study, "nosewitness identification" might be the next best thing. These researchers showed subjects videos of people committing violet crimes (or neutral videos in a control condition), while at the same time asking them to sniff a sample of body odor supposedly from the perpetrator.

Fifteen minutes later, the subjects were asked to pick out the odor from a lineup of five body odor samples. Turns out that these "nosewitnesses" performed better than chance in picking out the correct BO, especially after watching the crime videos. The researchers suggest that BO lineups might be a good alternative to visual lineups for certain types of crime... I'm just glad I'm not the one who has to collect the samples!"

Nosewitness Identification: Effects of Negative Emotion "Every individual has a unique body odor (BO), similar to a fingerprint. In forensic research, identification of culprit BOs has been performed by trained dogs, but not by humans. We introduce the concept of nosewitness identification and present the first experimental results on BO memory in witness situations involving violent crimes. Two experiments indicated that BO associated with male characters in authentic videos could later be identified in BO lineup tests well above chance. Moreover, culprit BO in emotional crime videos could be identified considerably better than the BO of a male person in neutral videos. This indicates that nosewitness identification benefits from emotional encoding. Altogether, the study testifies to the virtue of body odor as a cue to identify individuals observed under negative emotion." Related content: Flashback Friday: Study proves “old person smell” is real.Flashback Friday: Would a rose by any other name smell as sweet?Sorry, pregnancy doesn’t actually improve your sense of smell.