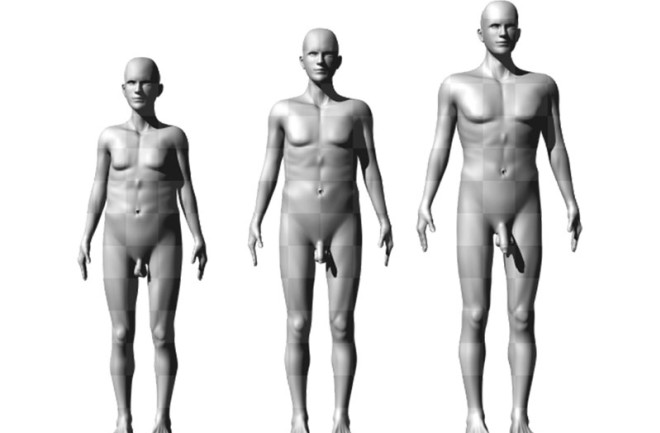 Figures representing the most extreme height, shoulder-to-hip ratio, and penis size are on the right and left; the center figure displays the average values. Image courtesy Brian Mautz & MakeHuman software Sorry, fellas: Size does matter, according to science. The size of a human penis is more closely correlated to sexual attractiveness than previous studies indicated, according to findings published online today in Proceedings of the National Academy of Sciences. The new research, which took into account other traits associated with attractiveness, also suggests that female preferences about penis size may have influenced how human male genitalia evolved. The subjects of the study were 103 heterosexual Australian women. The researchers presented the subjects with projected images of life-size, computer-generated male figures that rotated 30 degrees to each side for easier evaluation. Previous research used two-dimensional drawings of male figures, each varying only in penis length. By contrast, the three-dimensional figures used in the new study varied in height and shoulder-to-hip ratio as well as flaccid penis size. Each of the three traits tested had seven possible values; the study included videos for all 343 possible trait combinations. Researchers modeled additional traits in the study to assess whether the three aspects---height, shoulder-to-hip ratio and penis length---interacted to influence overall attractiveness. Their findings revealed that female participants showed strong preferences overall for taller men, men with greater shoulder-to-hip ratios---a “T” shape typically associated with masculine physiques---and longer penis length. Although previous research indicated strong female preference for taller men and those with greater shoulder-to-hip ratios, the study is significant for demonstrating that penis length is as important as height and more important than shoulder-to-hip ratio in influencing attractiveness. The findings contradict previous studies that reported penis size was unimportant to most females. Female participants in the new study who viewed random subsets of the life-size figures were also quick to rate those they found unattractive, but spent significantly longer gazing at the computer models they found appealing, particularly those with longer penises. This pattern is consistent with a human tendency to view attractive things for a longer time than those perceived as unattractive. Controlling for shoulder-to-hip ratio, the study also revealed that larger penis size had a greater influence on whether a taller man was judged attractive. Researchers suggested the result could be due to perceived penis size relative to height or because “general discrimination against short men” is such that “even a larger penis did little to increase their net attractiveness.” The study also pointed out, however, that women's penile preferences aren't always realistic. While the average flaccid penis length among men is 3.5 inches, the maximum length in the study was 5.1 inches, and the response trend indicated that women would have preferred an even larger penis. Although some previous research has suggested female preferences about the male form can change based on hormone levels, the study found no effect of either contraception use or phase of menstrual cycle on which figures participants considered attractive. According to the researchers, the basis for a female preference for a larger penis in her mate is not known, but may be related to cultural influences or her previous sexual experience. Regardless of why the preference exists, it may have influenced the evolution of penis size in humans. Before the advent of clothing, due to humans’ upright posture and the male’s “protruding, nonretractable genitalia,” as the study describes it, the penis was readily seen even when flaccid, and females were able to make precopulatory mate choices based on its size. This may have led to males with larger penises having more opportunities to mate and pass on the trait to their offspring.