Out of Africa: mend it, don't end it! 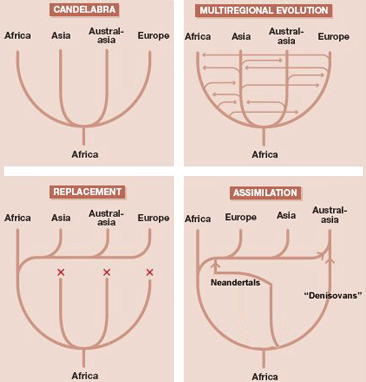 Dilettante human genetics blogger Dienekes Pontikos has a post up with a somewhat oblique title, Is multi-regional evolution dead? I say oblique because a straightforward title would be "Multi-regionalism lives!" He posted a chart from a 2008 paper which outlines various models of human origins, and their relationship to molecular data at the time. I have also posted the chart, but with a little creative editing on the "assimilation" scenario to reflect the possible Neandertal and Denisovan admixture events. Of these models the "candelabra" can be rejected as highly implausible. It posits very deep roots in a given region for distinct human populations. Unless you accept some sort of hominin population structure in Africa which were maintained by distinctive migrations out of Africa then the "replacement" model can be discarded (since the classic replacement model did not posit ancient African population structure being of any relevance outside of Africa you'd have to salvage it with a modification in light of new results). So the two primary disputants are a resurrected multi-regional model, and the assimilation model. But these two are really endpoints on a spectrum of models. What you need to do is vary the number of discrete populations and the rate of migration between the populations over time. The beauty of the replacement model was its parsimony: as far as recent human origins were concerned past gene flow via migration was a relatively academic concern. It was an exceedingly simple narrative framework. Consider this first episode of a 2009 British documentary, The Incredible Human Journey:

In the first episode, Roberts introduces the notion that genetic analysis suggests that all modern humans are descended from Africans. She visits the site of the Omo remains in Ethiopia, which are the earliest known anatomically modern humans, and visits the San people of Namibia to demonstrate the hunter-gatherer lifestyle. In South Africa, she visits Pinnacle Point, to see the cave in which very early humans lived. She then explains that genetics suggests that all non-Africans may descend from a single, small group of Africans who left the continent tens of thousands of years ago. She explores various theories as to the route they took. She describes the Jebel Qafzeh remains in Israel as a likely dead end of a traverse across Suez, and sees a route across the Red Sea and the around the Arabian coast as the likelier route for modern human ancestors, especially given the lower sea levels in the past.

A neat and tidy story. But reality is getting a lot less tidy & neat. Personally, the assimilation model as we understand it now seems to be the most plausible model. It remains more parsimonious than the alternatives: ancient population structure and complex patterns of gene flow and hybridization. But parsimony has misled us toward undo confidence in the recent past, so we should not weight this as strongly at this point. Where would we be without ancient DNA extraction? Some researchers have long claimed a more complex model than Out of Africa, but as long we relied in inferences from extant populations theses result were ignored or dismissed (notably, ancient DNA extraction is also unsettling our understanding of the very recent human past). There is though the pattern of greater African genetic diversity. Dienekes observes that a recent paper reports that some Indian populations may be more diverse genetically than HapMap Africans. I'm not too keen on overturning a generation of consensus yet in regards to this question based on one deeply sequenced region on one chromosome comparing some Indian tribal groups to two HapMap African populations (Yoruba, and a Kenyan Bantu group). So I accept the pattern of greater diversity until further research brings it more into doubt. Now the question is to explain the pattern. The most plausible explanation would naturally be the one outlined above in the 2009 documentary: non-Africans are the descendants by and large of a small number of Africans who left ~100,000 years B.P. They went through a population bottleneck which reduced genetic diversity sharply. Their genetic variance was a subset of that of Africans (with some admixture from other human lineages outside of Africa, as it now happens). But, there are other possibilities. One option sounds rather bizarre to me on first blush:

With respect to the reduced genetic diversity, one idea is that it is the result of genetic drift following a bottleneck in a small African population. But, the data can just as well be explained by species-wide selection which culled genetic variation.

Presumably selection would operate outside of Africa and homogenize non-Africans through a series of sweeps. Remember that selection and stochastic population events can sometimes be hard to differentiate, because both expunge variation from long swaths of the genome, resulting in long linkage disequilibrium blocks. This seems rather incredible as a proposition to me. Could selection operate all across Eurasia in such a fashion? From what I can tell in relation to more recent signatures of natural selection that does not tend to occur. The pattern for skin color for example is convergent phenotypes through different genetic architectures. How could gene flow tie together ancient human lineages and not H. sapiens sapiens? On the other hand, this could be an explanation for the consistent and taxon wide pattern of encephalization (though I believe this occurred in Africa as well). A second alternative would be that Africa's greater genetic diversity is simply a function of a much longer term effective population. In this model the climatic fluctuations of the Pleistocene periodically reduced non-African population to such an extent that these groups became a very minor proportion of the total census size of humans, and were so were swamped out by gene flow with the more numerous African humans. It seems to me that an extreme case of this model really verges into the same territory as the assimilation model. So I see this as more of a difference of degree than kind. Dienekes points to Y chromosomal markers which suggest "back-migration" to Africa. I don't totally discount this, but looking at the enormous diversity in groups like the Bushmen, I don't think we can attribute that to back-migration from Eurasia. It is notable that the Bushmen are basal to the rest of humanity, including the Yoruba + (Eurasicans + Australasians). Also, the genetic divergence between the Denisovan/Neandertal clade and modern humans is only ~33% greater than between Bushmen and Papuans. Speaking of differences of degree, that is becoming more and more the case when it comes to the so-called "dead ends" of human evolution and ourselves. Finally, there's the issue of non-neo-African admixture. Reich et al. give a figure of ~7.5% in Melanesians, and ~2.5% in Eurasicans. It is valid I think to point out that though others have offered figures in the literature before only with the reference sequences of ancient DNA are these widely accepted values. Perhaps they would be revised upward with other sequences. But two cautions: - There are only so many hominins to go around. Australia and the New World were only settled by modern humans. So how many were there running around in Eurasia? I think perhaps there may have been something different in South Asia, but that's just a very uninformed guess. - On the margin it seems clear that the autosomal DNA has enough fudge that interpretation meant that the archaic admixture signal could be dismissed. But the upper bound can't be that high, or the Fst values would be more extreme than they currently are. Modern humans do seem to share a great deal of "shallow" common ancestry. At the end of the day I am going to put my money on the assimilationist model because I believe in diminishing marginal returns. The Out of Africa replacement model was maximalist. Some tweaking on the margin is not very surprising, at least in hindsight, but more baroque forms of multi-regionalism have far too many moving parts. Newtonian mechanics may have been superseded in some domains by Einstein's theories and Quantum Mechanics, but for many purposes it does very well at predicting phenomena and modeling the world. I have full expectation of further refinements in the assimilation model, but I would bet that the age of revolutions is over for a long time. Then again, my confidence is modest at best. This is no time for certitudes. Note: A illustration of models: 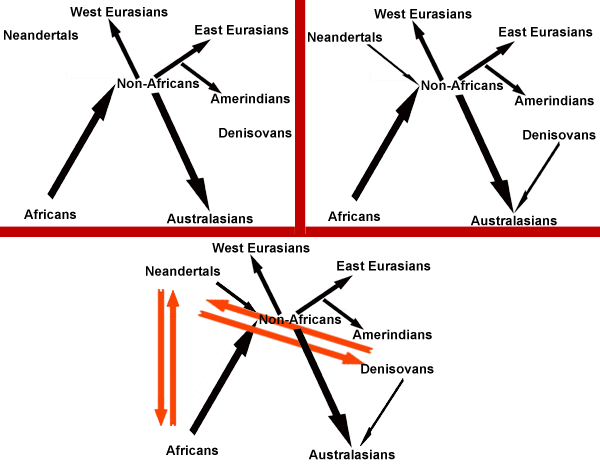