Other primates can perceive the horror that is the "Thatcher Illusion". 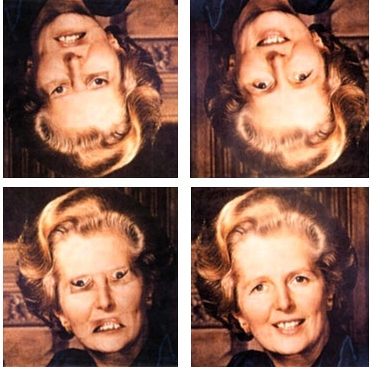 The so-called "Thatcher Illusion" is named after its most famous, and original, example (left). Peter Thomson was the first to notice that if upside down, one hardly notices an inversion of individual facial features, but if that face is turned right-side-up, blammo: it's terrifyingly awful. There are a number of studies that try to explain the cause of this illusion, but these authors take a different tack. They wondered if other primates can see it too, which would imply a shared facial imaging processing network. It turns out that, yes, chimps also seem to be able to see this illusion, although rhesus monkeys could not. Lucky monkeys!

How the Thatcher illusion reveals evolutionary differences in the face processing of primates. "Face recognition in humans is a complex cognitive skill that requires sensitivity to unique configurations of eyes, mouth, and other facial features. The Thatcher illusion has been used to demonstrate the importance of orientation when processing configural information within faces. Transforming an upright face so that the eyes and mouth are inverted renders the face grotesque; however, when this "Thatcherized" face is inverted, the effect disappears. Due to the use of primate models in social cognition research, it is important to determine the extent to which specialized cognitive functions like face processing occur across species. To date, the Thatcher illusion has been explored in only a few species with mixed results. Here, we used computerized tasks to examine whether nonhuman primates perceive the Thatcher illusion. Chimpanzees and rhesus monkeys were required to discriminate between Thatcherized and unaltered faces presented upright and inverted. Our results confirm that chimpanzees perceived the Thatcher illusion, but rhesus monkeys did not, suggesting species differences in the importance of configural information in face processing. Three further experiments were conducted to understand why our results differed from previously published accounts of the Thatcher illusion in rhesus monkeys." Related content: Seriously, Science?: This optical illusion will blow your mind! NCBI ROFL: Wobbling appearance of a face induced by doubled parts. NCBI ROFL: What the cluck? Chickens can see optical illusions, and imprint on them.