Oscar The Death Cat: I Haz Sniffed Many Deaths 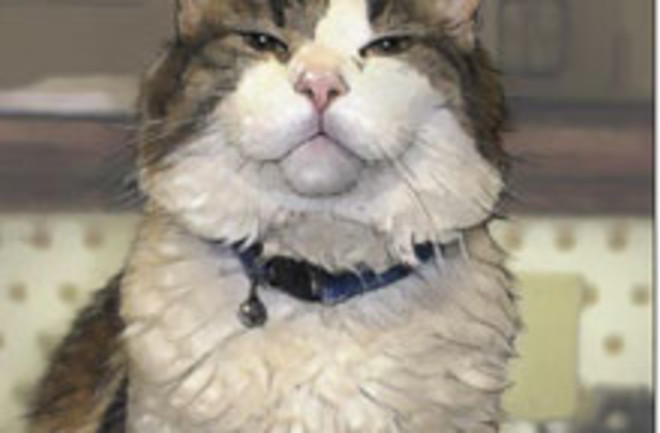 For the last five years, Oscar the cat has been sniffing out death. Literally. The cat lives at the Steere House Nursing and Rehabilitation in Providence, Rhode Island, a facility that cares for people with severe dementia. Back in 2007, geriatrician and Brown University professor David Dosa wrote a perspective in The New England Journal of Medicine claiming that Oscar is the cuddlier, feline equivalent of the Grim Reaper. According to Dosa, his mere presence at the bedside of severely ill patients is viewed by doctors and nurses alike as an almost absolute indicator of impending death. Now Oscar is back in the news, as Dosa has just published a book expanding on the story. The Telegraph reports:

The tortoiseshell and white cat spends its days pacing from room to room, rarely spending any time with patients except those with just hours to live. If kept outside the room of a dying patient, Oscar will scratch on the door trying to get in. When nurses once placed the cat on the bed of a patient they thought close to death, Oscar "charged out" and went to sit beside someone in another room. The cat's judgment was better than that of the nurses: the second patient died that evening, while the first lived for two more days.

Over the years, Oscar has racked up an impressive record; Dosa claims the cat has morbidly predicted the deaths of about 50 patients at the nursing home. Dosa suggests Oscar's unique ability could stem from an ability to detect ketones--distinctly odored biochemicals given off by dying cells. This isn't as crazy as it sounds; after all, some dogs have been trained to sniff out cancer. However, since Dosa has only speculated on the science that could, maybe, potentially be at work here, we're not going to consider this anything more than a sweet and odd story for the time being. Or maybe there's something more ominous going on. Could Oscar be an "angel of mercy," taking it upon himself to put patients out of their misery? Judging from Dosa's article in The New England Journal of Medicine, he may have half-suspected this himself:

"There will be no more deaths today,^ not in Room 310 or in any other room for that matter. After^ all, no one dies on the third floor unless Oscar pays a visit^ and stays awhile."

Discoblog: Looking to Immortalize Your Pet? Now You Can Turn Muffy’s DNA Into a Diamond

Discoblog: NCBI ROFL: What kind of panties should I put on my bitch?