'Organ On A Chip' Re-creates the Female Menstrual Cycle 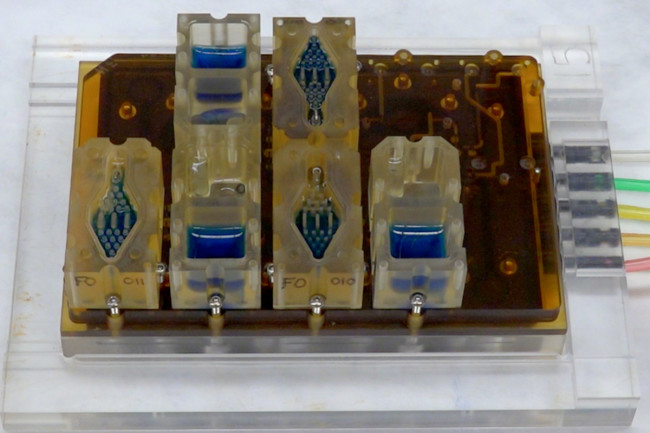 The EVATAR system. Each cube represents a different organ, and the blue fluid stands in for blood. (Credit: Northwestern University) A collection of human cell-lined boxes successfully reproduced the female menstrual cycle, marking another step forward for so-called "organs-on-a-chip." Researchers at Northwestern Medicine have re-created the organs of the female reproductive system in an artificial environment and linked them together. By pumping a blood-like medium through their system, they coaxed the tissues into normal functionality, which includes the production of hormones and other chemicals that regulate menstruation. The reproductive system on a chip will act as a model to help researchers understand diseases like endometriosis and fibroids, as well as cancer and infertility.

The system, called EVATAR, is the result of a collaboration between several researchers at Northwestern, each of whom developed a different organ to be ultimately linked together. The entire artificial reproductive system is small enough to be held in one hand, and consists of a series of cubes connected by small hoses. Each cube corresponds to a different organ — ovaries, fallopian tubes, uterus, cervix, vagina and liver — and consists of a series of channels and chambers lined with cells kept alive with a nourishing artificial medium. A series of pumps mimics circulation, which allows the different organs to communicate with each other through hormones. Most of the cells that went into the system were obtained from actual women during surgery, as opposed to being grown from stem cells, adding another level of authenticity to the system. Only the ovary cells came from a mouse. In a paper published in Nature Communications Tuesday researchers were able to keep their system working for a month, long enough to produce a full menstrual cycle, as measured by the release of hormones that mark the beginning and end of the 28-day cycle. The system wasn't meant to actually fertilize and shelter an egg, though. The researchers were just looking to see if they could reproduce the hormonal fluctuations that accompany the cycle, imbalances in which have been implicated in a range of conditions affecting the reproductive organs. "This will help us develop individualized treatments and see how females may metabolize drugs differently from males," said lead investigator Teresa Woodruff in a statement. "This mimics what actually happens in the body. In 10 years, this technology, called microfluidics, will be the prevailing technology for biological research."

Reproducing a complex process like menstruation indicates that the various organs and tissues are all functioning properly, and paves the way for drug tests using the artificial system. While it may be amazing to recreate our bodies internal conditions on a chip, what researchers really want to do is see what happens when we upset the system. Organs-on-a-chip are so exciting because they will allow researchers to introduce new drugs to simulated systems and see how they interact, in addition to simulating diseases to watch how they affect our bodies. Very few drugs ever make it past human trials, partly because researchers must exercise the utmost caution when experimenting on humans. Using an artificial organ, or system of organs, could speed the process up immeasurably. Organs-on-a-chip could also be used to personalize treatments. By creating a system with a patient's own cells, researchers can test interventions tailored specifically to their needs. In the past, researchers have experimented with cells grown in a dish. Cells don't always behave the same way outside of our bodies, however. The sum total of the conditions inside our bodies, called the microenvironment, plays an important though dimly understood role in regulating how our cells react. Putting our cells inside an environment that more closely mimics the insides of our bodies gets us one step closer to fully modeling a human body. This current work is a step forward for organ-on-a-chip technology, but it's still not a whole body. Parts of our bodies that the researchers haven't included in their model, such as the immune system, could play a role in affecting reproductive health as well. This is why researchers one day hope to build entire bodies on a chip to fully capture the complexity of our physiologies. What began with organs has expanded to organ systems, with the rest still to come.