During a checkup, a patient’s deepest concern is sometimes expressed at the last moment. 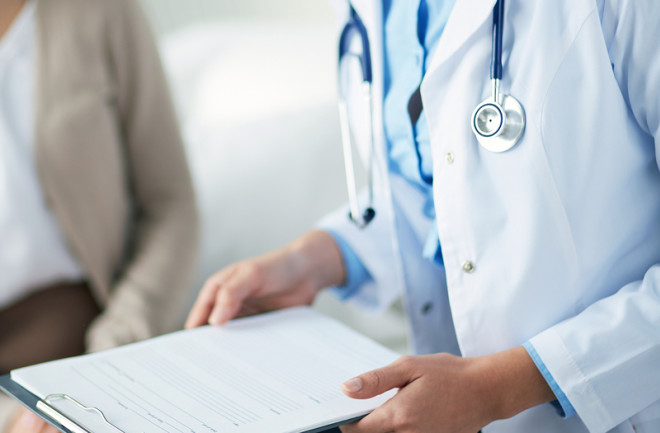 My annual physical was nearly over. The doctor had asked routine questions, used her stethoscope to listen to my heart and lungs, and ordered tests of my cholesterol and vitamin D levels.

Throughout the visit, which happened years ago, I pondered sharing what had been preoccupying me for weeks. It was embarrassing, unexpected and probably meant nothing, I thought.

As my doctor’s hand clasped the doorknob, I finally sought reassurance. “I feel like I’ve been gaining weight,” I said hesitantly, “but it’s just in my belly.”

“Well, you’re not pregnant, so your metabolism may be slowing down with age,” she said curtly. “That can happen in your mid-20s. So just up the exercise to 30 minutes a day and watch your diet. Cut out alcohol and fatty foods.”

She advised a follow-up in a few months and left the room.

Since moving to New York City to start a master’s degree in public health, I had been eating healthfully and staying active. I felt better than ever. So I was surprised the doctor saw the problem as a lack of fitness, but it seemed awkward to question her. I felt silly for mentioning my concern, especially at the end of the appointment. I changed back into my clothes, walked to the local market for a kale smoothie and started going to a yoga class twice a week.

I didn’t know it at the time, but at my exam, I had unwittingly uttered what doctors call the “doorknob complaint” — a possible medical issue brought up at the last moment of an appointment.

With the next patient waiting in the neighboring exam room, it’s tempting for doctors to dismiss the complaint, defer it to a future appointment or assume that a simple symptom — gaining weight, occasional headaches or not sleeping well — has a straightforward cause. In medical school, students learn that common symptoms typically are common illnesses. “When you hear hoofbeats, think horses, not zebras, unless you’re in Africa,” the medical saying goes. But when faced with the time limits of daily practice, doctors can rely too much on the common instead of searching for the unusual.

Later that school year in New York, I needed a physical for a new job and returned to my primary care doctor. Busy with graduate school midterms, I pleaded with the receptionist to just give me a form documenting my prior exam. “Sorry, it’s been nearly six months since your visit, so you need to be seen. It’s policy,” she insisted.

I waited in the exam room, chilly in my underwear and oversized gown, thinking about my abdomen.

After a shower recently, its reflection in the bathroom mirror had a strange asymmetry, the left side protruding more than the right. My belly felt firmer on the left. My pants were hard to button. I stepped on the bathroom scale. I weighed 6 pounds more than a few months ago, despite my active life.

When the physician’s assistant came in, I shared my observations immediately. He began pushing gently to the right of my belly button, moving left then stopping abruptly. His expression went from relaxed concentration to slight awe to definite concern. He left the room as I lay on the exam table, belly exposed. He returned with two doctors, who pressed in the same areas and showed the same concern.

Despite being 5 p.m. on a Friday, they were going to send me for a CT scan. I sensed their urgency but was given little explanation of what they’d found. They said only that there was a “mass.” I did not yet know that in medicine, mass almost always means cancer.

The scan showed a tumor larger than a football. It had pushed nearly all of my left-side organs to the right side. It was liposarcoma, a rare cancer made up of fat cells gone awry. Diet and exercise would not shrink this malignant fat. And chemotherapy would not kill it because it was too big and the cells divided too slowly. The tumor had to be cut out quickly and carefully. But that wouldn’t be the end. Though survivable, the cancer in my case had a high chance of returning.

My life was upended. Time became distorted. It marched briskly as I scheduled surgery and notified insurance. It slowed as I sat in endless waiting rooms, pondering whether I would finish my studies, have children or live past 30.

Just a week and a half after the physical, a six-hour surgery removed my tumor completely. I left the hospital 15 pounds lighter. I fell into the anxious rhythm of the every-three-months scans, looking for my tumor’s return. I tried to savor those months in between, but often felt hostage to a disease I could not prevent. Trust in my own body was shattered.

My cancer has recurred twice since, once during medical school and then in the middle of my pediatric residency training. In the second surgery, I lost organs — a kidney, my spleen, a piece of my intestine. I have learned to live in uncertainty.

I’ve often wondered if the cancer could have been found sooner. If I’d asked the doctor earlier, or if she’d examined my abdomen more thoroughly, would she have found the mass? Was it there and overlooked? Or as a cancer known to be insidious, would it have escaped detection?

A life in medicine has shown me that we doctors are fallible. Like anyone, we can be tired, overworked, irked by disorder, biased by experience, lulled by pattern. We tire of the messiness of illness and become frustrated when time is not ours to control.

The relentless volume of patients in an emergency room or clinic can create a treadmill that’s hard to step off of. Physicians can resist anything that changes their forward movement. But when a patient exerts a force — the doorknob complaint — doctors are wise to take heed. The complaint, which usually requires significant effort from the patient to disclose, unmasks that person’s deeper concerns. These moments require respect, attention and investigation.

I have since asked myself: Am I a doctor who pauses, thinks thoughtfully, listens actively — the one who treats people with all their imperfections, instead of as numbers and diagnostic codes? Can I resist a medical system that often prioritizes productivity over health? Self-inquiry helps me pause, dig deeper, take my hand off the doorknob and listen to the patient.

Julia Michie Bruckner is a pediatrician at Children’s Hospital Colorado in Aurora. This article was adapted from one of Bruckner’s blog posts at juliamd.com. The cases described in Vital Signs are real, but names and certain details might be changed.