On the purpose of saying "ow" when you hurt yourself. 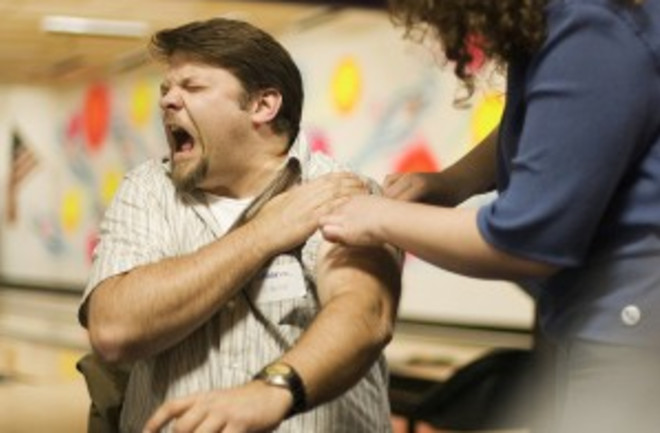 If you bite your tongue or stub your toe, your first instinct is probably to yell. But have you ever wondered why that is? According to this study, being vocal could actually help you tolerate the pain. Here, the authors tested how long subjects could keep their hands immersed in very cold water before they couldn't take it anymore. The researchers found that saying "ow" during the experiment increased the subjects' tolerance for pain, but hearing a recording of their own voice or someone else's voice saying "ow" did not. These results are consistent with a previous study that found that swearing is also an effective way to increase pain tolerance; both studies suggest that the vocalization helps distract you from the pain and could be related to an evolutionarily-preserved "flight-or-flight" response.

On the Importance of Being Vocal: Saying “Ow” Improves Pain Tolerance "Vocalizing is a ubiquitous pain behavior. The present study investigated whether it helps alleviate pain and sought to discern potential underlying mechanisms. Participants were asked to immerse one hand in painfully cold water. On separate trials, they said “ow,” heard a recording of them saying “ow,” heard a recording of another person saying “ow,” pressed a button, or sat passively. Compared to sitting passively, saying “ow” increased the duration of hand immersion. Although on average, participants predicted this effect, their expectations were uncorrelated with pain tolerance. Like vocalizing, button pressing increased the duration of hand immersion, and this increase was positively correlated with the vocalizing effect. Hearing one's own or another person's “ow” was not analgesic. Together, these results provide first evidence that vocalizing helps individuals cope with pain. Moreover, they suggest that motor more than other processes contribute to this effect." Related content: Flashback Friday: Swearing when you hurt yourself actually makes it feel better.NCBI ROFL: Effects of playing video games on pain response during a cold pressor task.NCBI ROFL: Socially awkward? Just take a Tylenol.