The leader author of the PLoS Genetics paper Inferring the Demographic History of African Farmers and Pygmy Hunter-Gatherers Using a Multilocus Resequencing Data Set, which I blogged a few days ago left a clarifying comment:

I just have few remarks. I do not expect that the Bantu expansions are responsible for the separation of Western and Eastern Pygmies. In a recent article in Current Biology, Paul Verdu and colleagues showed that the separation of Pygmy groups, but only those from the Western part of sub-Saharan Africa, diverged concomitantly with Bantu expansions (3,000-5,000 years ago). Our estimate at 20,000 years is much older, and suggests older events as the basis of the separation of these two more divergent Pygmy groups. As you noticed, Razib, the fact that all African Pygmies have a recent ancestor does not obligatorily means that they acquired low stature from their common ancestor. However, we now have identified some candidate genes, involved in the growth hormone signalling pathway, that show mutations at 70-80% frequency in al African Pygmies and 10% in African non-Pymies. Interestingly, these mutations are derived (non-ancestral). But this is VERY preliminary, and it requires in-depth validation. 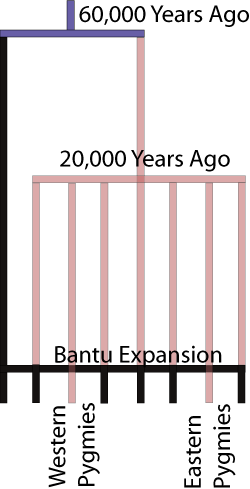 As to the first paragraph, I will clarify my own tentative suggestion with the cladogram to the left. My suggestion is that the Western and Eastern Pygmies have a deep common ancestry as part of a continuum of forest & savanna peoples who were extant before the Bantu expansion. Regions of Central Africa which were amenable to Bantu agriculture were populated by them, and the local groups went extinct. In contrast it may be that the populations which became the Western and Eastern Pygmies persisted because of local ecological conditions and geographical constraints (e.g., dense forests & riverine networks, distance from the original expansion hearth in the case of the Ituri). As for the point about the genes in question, very interesting. The only caution that I would make is that if there are only a finite set of large effect genes which can modulate the normal range of height into the Pygmy range then the same genes might plausibly be hit multiple times, so I'm interested to see if the phylogenies of the haplotypes suggest a common ancestral mutant, or not. In any case, it seems the question will be settled as an empirical matter soon.