On the Michigan Ballot: Should Human Embryos be Used in Medical Research? 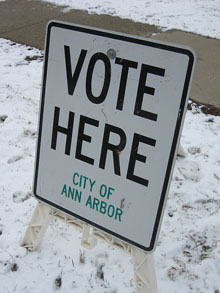 While the nation decides on the fate of Barack Obama and John McCain tomorrow, residents of Michigan will also decide on the fate of thousands of human embryos. They will be voting on Proposition 2, an amendment to the state constitution that would lift a 30-year-old ban on the destruction of human embryos to get stem cells for medical research. Currently, researchers in the state must import embryonic stem cell lines from other states or countries. (Research on embryonic stem cells is legal in Michigan, but not the destruction of embryos.) The nationwide ban on federal funding for most embryonic stem cell research, instituted in 2001, will still hold, although both Obama and McCain have stated they would lift the ban if elected.

The proposition is sponsored by the bipartisan group Cure Michigan.

Proponents argue embryos in fertility clinics are routinely thrown away, so why not donate them to science [Detroit Free Press]?

The U. S. currently has 400,000 frozen embryos in storage, most of which will be discarded. Supporters

say embryonic stem cell research could lead to therapies for degenerative diseases like Alzheimer's and juvenile diabetes, and that lifting the ban would advance the state's biomedical industry and create thousands of new jobs.

Opponents, organized under Michigan Citizens Against Unrestricted Science and Experimentation

and supported by $5 million from the Michigan Catholic Conference, believe the destruction of embryos is tantamount to murder. Many also fear the ban would allow unregulated scientific research that could lead to a

"I'd call it a religious-ethical friction," says Leonard Fleck, a medical ethicist at Michigan State University in Lansing, who favors [lifting the ban on research]. "It's obviously related to the abortion issue. What gives it a different moral coloring, what we'd hope to accomplish with the embryonic stem cells, is the saving of human life."

Proponents have been airing TV ads showing a paralyzed former cheerleader and suggesting that embryonic stem cell research offers hope for a cure. Opponents have been airing TV ads with images of black syphilis patients who were purposely left untreated in the infamous Tuskegee experiments, suggesting the unethical nature of embryonic stem cell research. Both sides have criticized each other for unrealistic appeals to voters' emotions. The latest poll by the Detroit Free press and WDIV-TV shows 51 percent in favor of the proposition, 40 percent against and 9 percent undecided, indicating a drop in support since late September, when 58 percent of those polled said they would vote yes. Related Content: DISCOVER: In Election Year, Stem Cell Question Grows Still Gnarlier DISCOVER: Science That the Government Doesn't Want to Exist 80beats: 5 of 21 Federally Approved Stem Cells Lines are Ethically Tainted