I have pointed to the fact that mtDNA genetics has suggested that the polar bear is actually a derived lineage of brown bears. And, more specifically, that some extant lineages of brown bears share a more recent common ancestor with polar bears than other brown bears. In other words, brown bears are paraphyletic. Apparently there has been dispute of when the polar bear morph emerged from the brown bears. Luckily polar bears have been resident in a region where the likelihood of preservation of ancient DNA is relatively high. PNAS has a new paper which reports on the extraction of genetic material from ancient polar bear remains. Complete mitochondrial genome of a Pleistocene jawbone unveils the origin of polar bear:

The polar bear has become the flagship species in the climate-change discussion. However, little is known about how past climate impacted its evolution and persistence, given an extremely poor fossil record. Although it is undisputed from analyses of mitochondrial (mt) DNA that polar bears constitute a lineage within the genetic diversity of brown bears, timing estimates of their divergence have differed considerably. Using next-generation sequencing technology, we have generated a complete, high-quality mt genome from a stratigraphically validated 130,000- to 110,000-year-old polar bear jawbone. In addition, six mt genomes were generated of extant polar bears from Alaska and brown bears from the Admiralty and Baranof islands of the Alexander Archipelago of southeastern Alaska and Kodiak Island. We show that the phylogenetic position of the ancient polar bear lies almost directly at the branching point between polar bears and brown bears, elucidating a unique morphologically and molecularly documented fossil link between living mammal species. Molecular dating and stable isotope analyses also show that by very early in their evolutionary history, polar bears were already inhabitants of the Artic sea ice and had adapted very rapidly to their current and unique ecology at the top of the Arctic marine food chain. As such, polar bears provide an excellent example of evolutionary opportunism within a widespread mammalian lineage.

It turns out that this particular bear is at the root of the tree in relation to the separation between polar bears and the ABC brown bears. That suggests that polar bears began to speciate on the order of ~100,000 years ago, and that their speciation occurred within about 10-30,000 years. Figure 3 shows the relations between modern brown & polar bear populations, and the ancient polar bear: 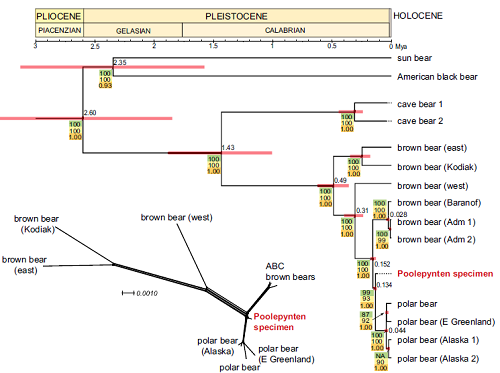 The relationship between this paper and the stickleback paper should be clear: ecological change tracks changes in evolution, and in a sense is causal. The cases of the freshwater sticklebacks and polar bears are somewhat inverted insofar as the cooling opened up opportunities in the case of the latter, and removed them in the former. Additionally, the circumpolar polar bears radiated from a common ancestor and are one genetic species, not localized independently derived ecotypes. In this manner, polar bears are somewhat similar to humans, as is noted in the paper. Our own species seems to have left Africa and spread across the World Island within about 10,000 years, and adaptively radiated. If the polar bear goes extinct today, what will happen when the next Ice Age opens up more opportunities? Likely the "polar bear" will reappear, assuming that human intervention does not forestall such evolutionary responses. In fact there may be an eternal recurrence in the cases of bears and sticklebacks over the past few million years of Ice Ages whereby cold adapted morphs emerge, and go extinct, repeatedly. What would happen if all non-African populations were exterminated? Likely Africans would resettle the rest of the world, and de-pigmentation and Bergmann's would produce lighter populations all around the temperate zones within 10,000 years. The specific details might vary, consider how light skinned populations in Britain and Japan are rather different. It illustrates how evolution is both contingent and deterministic.Citation: Charlotte Lindqvist, Stephan C. Schuster, Yazhou Sun, Sandra L. Talbot, Ji Qi, Aakrosh Ratan, Lynn P. Tomsho, Lindsay Kasson, Eve Zeyl, Jon Aars, Webb Miller, Ólafur Ingólfsson, Lutz Bachmann, and Øystein Wiig, Complete mitochondrial genome of a Pleistocene jawbone unveils the origin of polar bear, doi:10.1073/pnas.0914266107