It is well known that different ethnic groups vary when it comes to diseases such as Type II Diabetes. Or, more specifically they vary in terms of risk, all things equal (if you use an online Type II Diabetes calculator you'll see immediately as they sometimes have a parameter for ethnicity). American blacks for example are heavier than American whites. This seems to be true even when you control for socioeconomic status (though as Oprah once said, "You don't need to do a 'study' to figure that out"). There has been research on genetic loci correlating to obesity in European populations before, but there is now a new one which looks at African Americans, and tries to ascertain whether some of the loci might be unique to them because of their racial ancestry. Admixture Mapping of 15,280 African Americans Identifies Obesity Susceptibility Loci on Chromosomes 5 and X:

Obesity is about 1.5-fold more prevalent in African Americans than European Americans. To determine whether genetic background may contribute to this observed disparity, we scanned the genomes of African Americans, searching for genomic regions where obese individuals have a difference from the average proportion of African ancestry. By examining genetic data from more than 15,000 African Americans, we show that the proportion of European ancestry is inversely correlated with BMI. In obese individuals, we detect two loci with increased African ancestry on chromosome X (Xq13.1 and Xq25) and one locus with increased European ancestry on chromosome 5 (5q13.3). The 5q13.3 and Xq25 regions both contain genes that are known to be involved in appetite regulation. Our results suggest that genetic factors may contribute to the difference in obesity prevalence between African Americans and European Americans. Further studies of the regions may identify the causative variants affecting susceptibility to obesity.

The sample here is ~20% European in ancestry, in line with a large body of research on African Americans. Additionally, there is variance in the black community in terms of how much European ancestry an individual has (e.g., a rule of thumb is that around 10% of black Americans are actually 50% or less African in ancestry). This study find a weak but statistically significant negative correlation between European ancestry and Body Mass Index (BMI), ρ = −0.042 & P = 1.6×10^−7. Here's the figure (modified to fit on the screen) which illustrates it: 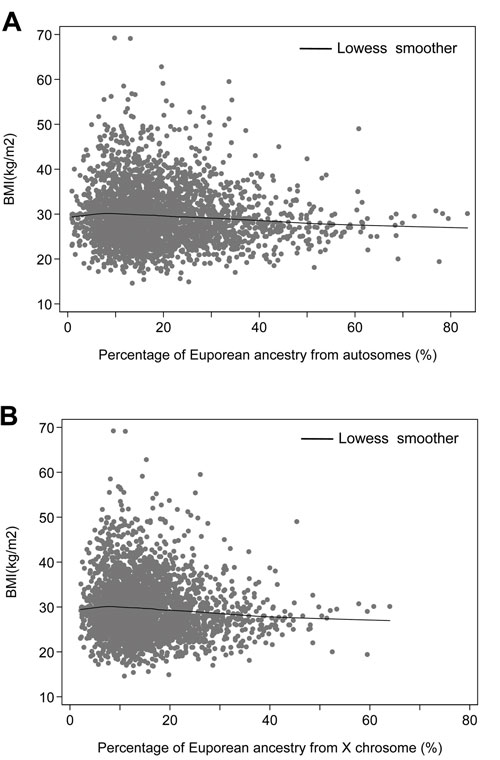 Let's jump to the part on where they find associations between obesity and particular genetic variants:

The residual association of local ancestry with BMI after adjusting for genome-wide ancestry remained significant at both Xq13.1 (P = 1.9×10−7) and Xq25 (P = 4.1×10−6) (Model 2 in Table 3), indicating that local ancestry had an effect on BMI above and beyond genome-wide ancestry. Both associations were nominally genome-wide significant (P = 1.9×10−4 and P = 4.1×10−3) after conservatively correcting for 1,000 hypotheses tested. A naive analysis suggests that each additional copy of a European ancestral allele at either the Xq13.1 or the Xq25 peak is independently associated with a BMI decrease of ~0.1 Z-score units on average (equivalent to ~0.64 kg/m2 and accounting for 0.3% of the variance in BMI, after adjusting for age, age-squared, sex and study). The true genetic effects are expected to be somewhat weaker because of discovery bias.

There was a weak correlation between total European genome content in African Americans. But here what they have found are possible genetic regions with elevated European ancestry, that is genes which are distinctively European in form which some African Americans carry. These genes seem to correlate with reduced BMI. The key point is that you have to zoom in on a finer grained level genomically because total ancestry isn't always going to be a good predictor. But here's an interesting find:

The association at the 5q13.3 peak was particularly interesting in that it did not achieve statistical significance until the genome-wide estimate of European ancestry was added into the analysis. This was presumably because the locus effect was in the opposite direction to the genome-wide ancestry effect (thus, the effects cancel in the unadjusted analysis). Each additional copy of a European ancestral allele at 5q13.3 was significantly (P = 5.8×10−7) associated with an increase in BMI of 0.09 Z-score units (naively equal to ~0.59 kg/m2, accounting for 0.3% of the variance in BMI), which was nominally significant (P = 5.8×10−4) after correcting for the approximately 1,000 independent hypotheses tested.

In other words, the overall trend obscured this particular signal. In any case the authors note that there is research which suggests that obesity is ~40% heritable, so those heritable genetic components may vary between populations (as well as within). Studies in diverse populations, including admixed ones, obviously are going to be important pieces of the puzzle. Citation: Cheng C-Y, Kao WHL, Patterson N, Tandon A, Haiman CA, et al. (2009) Admixture Mapping of 15,280 African Americans Identifies Obesity Susceptibility Loci on Chromosomes 5 and X. PLoS Genet 5(5): e1000490. doi:10.1371/journal.pgen.1000490