Nutritionists to America: For the Love of God, Don't Try the Twinkie Diet 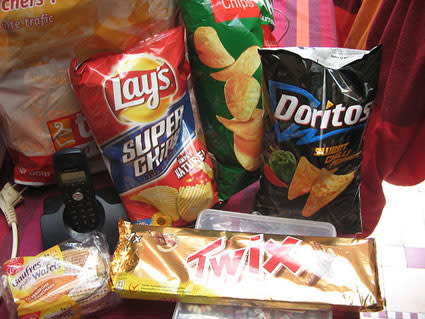 It's been making headlines all week ("Twinkie diet helps man lose weight" and "Trying To Lose Weight... Try The Junk Food Diet" might be some of the worst health-related headlines I've seen in awhile) as the Ding-Dong Diet or the Twinkie Diet, but let's just call it the worst diet ever for short. The newsplosion came from an experiment by Mark Haub, an associate professor in the department of human nutrition at Kansas State University. In an effort to prove to his class the importance of calories in weight gain and loss, he decided to drastically change his eating habits. He embarked from the shores of a balanced diet of fruits, vegetables, grains, and meat (totaling about 2,600 calories per day) to a junk food diet consisting of Twinkies, Hostess and Little Debbie snack cakes, and Doritos--with sides of vitamin pills, protein shakes, and small portions of vegetables. He lost 27 pounds in 10 weeks. Why? Because he restricted his new diet to a total of 1,800 calories per day. He expected to lose weight, but was unsure about the other health outcomes of the diet. Ten weeks later his blood tests showed that both his lipid levels and glucose had lowered, a fact that would put him in a healthier heart state, according to the American Heart Association's guidelines. According to ABC News, Haub even felt better:

The thing is, he began to feel healthier. He had more energy, stopped snoring, and not only did he lose enough weight to drive down his overall cholesterol and body mass index (BMI), his good HDL cholesterol crept up two points and his blood glucose -- despite all that cream filling -- dropped 17 percent.

Discoblog was skeptical about the hype over Haub's junk food binge, so we asked some nutritionists and doctors what they thought of it. We came back with several different takes, but one general message. In a loud and clear voice, these nutritionists are telling America that this diet is a bad idea, and pleading with people not to try it. The experts did agree that the diet had one important lesson: It really showed just how much weight loss can improve your health. It also demonstrated that just cutting the number of calories you take in is enough to make you lose weight. But James Hill

, the director of human nutrition at the University of Colorado, Denver told Discoblog that health-conscious people shouldn't emulate Haub:

"This is not the diet you should be eating. The goal is to find a way you can eat forever and this isn’t a way to eat forever. This is a stunt, the stunt illustrates it doesn’t matter what you eat, if you take in less than you expend you will lose weight, but nobody should be promoting this as a way of eating. 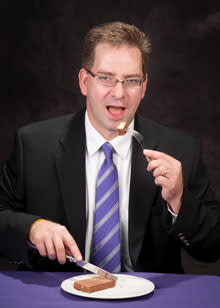 Our nutritionists all agreed: This kind of diet isn't sustainable in the long run. "Health is not measured in your habits of days and weeks," said Miriam Pappo, director of clinical nutrition at Montefiore Medical Center. After the weight loss benefits from the caloric restriction kick in, the dangerous combination of fat and sugar in these processed foods will start to take their toll. Also, Haub's diet is lacking in a variety of basic nutrients that will risk his health in the long run, according to Pappo:

"The effects of what he did showed the importance of weight loss and how immediately weight loss can effect our well being and our lab results. However, long term, his diet was one that was void of antioxidants, phytonutrients, and fiber, all of which have been associated with longevity, with cancer prevention, diabetes control, and mental acuity, among other things. So, he would probably not fare well in the long term."

And while the weight loss benefits are showing in Haub's blood tests now, it's not certain that once he reaches his goal weight these benefits will be sustainable on a diet with such a high fat and sugar content. Hill doesn't believe the he will be able to keep the weight off in the long run:

"Weight loss isn’t any long term benefit unless you keep it off. If you lose weight and regain it, you are right back where you started. And most diets, that’s what happens. And I’m sure it’s going to happen to this guy."

"Man has the unique ability to take a very healthy food substance and to chemically alter it into something that is not healthy, " said Pappo, who also made the point that even some foods labeled low-fat or low-sugar can have negative health consequences. Walter Willet

, from the department of nutrition at Harvard University, agrees:

"Much confusion exists about the definition of junk vs healthy food. Many people still believe that a bagel with jelly is a healthy food because it is low in fat, but in reality almost nothing could be worse than this large dose of refined starch and sugar. In contrast, Doritos and most other chip are now trans fat free and made with unsaturated fats that reduce blood cholesterol and risk of heart disease. Thus, they will be healthier than most of the foods consumed by Americans, which is not to say that a Dorito diet is recommended."

Eat food. Not too much. Mostly plants.

That, more or less, is the short answer to the supposedly incredibly complicated and confusing question of what we humans should eat in order to be maximally healthy.

80beats: A Victory for the Atkins Diet? Not So Fast.

Not Exactly Rocket Science: You are what you eat – how your diet defines you in trillions of ways