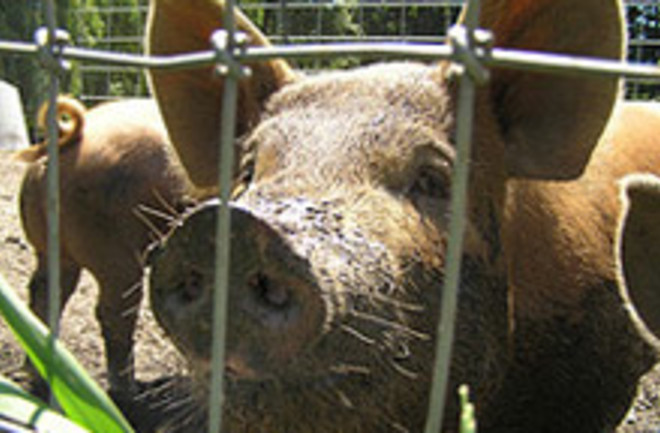 The number of people infected with Ebola traced from pigs in the Philippines has reached five, but health officials say there is no cause for panic--although they do advise wary attention. The strain of the disease, Ebola Reston, is thought not to be dangerous to humans, and the first identified case, a pig handler who was infected at least six months ago, is still healthy. But experts say there remains some concern because

pigs are mixing vessels for other human and animal viruses, like flu, and because it shows that pigs may also be able to transmit the lethal strains of Ebola. Far more humans are in regular contact with pigs than with apes, monkeys or bats, the other known hosts [The New York Times].

The virus was first identified in pigs in the Philippines last year, at which point two farms were closed and blood samples collected from 6,000 pigs and 50 workers. From those, four pigs and one worker tested positive, says Francisco Duque, the Philippine health secretary. In January, a new round of testing turned up four more infected men who worked on pig farms and in slaughterhouses. Duque insists there is no reason for the public to be alarmed, saying that all five men seem to be in good health and are no longer carrying the virus. He adds that the presence of antibodies in the five patients demonstrates the “protective defense” that they have built up against the Ebola Reston virus.

Like the first positive human, the four others are also healthy and have not been seriously ill in the previous 12 months" [The Philippine Star],

says Duque. There is

“more need to investigate than to worry” [The New York Times]

says Juan Lubroth, an agriculture official with the United Nations. Lubroth also says that the pigs involved had multiple infections, and that it might not have been Ebola that made them so sick. “But farmers, of course, would prefer to have pigs without Ebola,” he said. “So we want to do more testing to see what they can do to protect them”