Not all genes are equal in the eyes of man 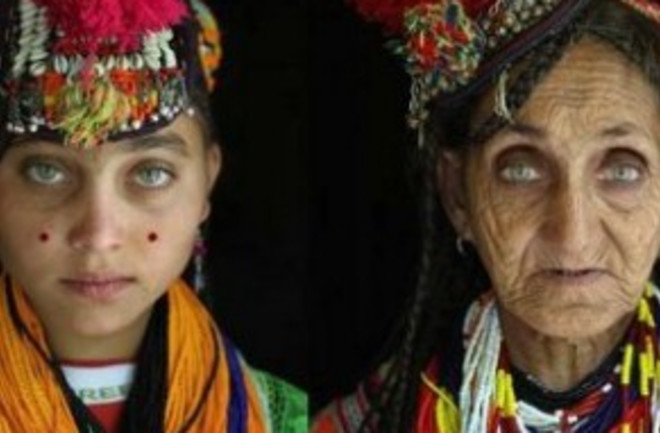 A few days ago I was listening to an interview with a reporter who was kidnapped in the tribal areas of Pakistan (he eventually escaped). Because he was a Westerner he mentioned offhand that to "pass" as a native for his own safety he had his guides claim he was Nuristani when inquiries were made. The Nuristanis are an isolated group in Afghanistan notable for having relatively fair features. His giveaway to his eventual captors was that his accent was clearly not Nuristani, and master logicians that the Taliban are, the inference was made that he was likely a European pretending to be Nuristani. I thought about this incident when looking over the supplements yesterday of Reconstructing Indian population history. On page 19 note S2 figure 1 includes the Kalash of Pakistan. These are the unconverted cousins of the Nuristanis who were not forcibly brought into the religion of peace in the late 1800s because their region of the Hindu Kush was under British rule, who naturally imposed their late 19th century European value that populations should not be converted by force to a particular religion (Nuristan means "land of light," whereas before Afghans called it Kafiristan, "land of the unbelievers"). Despite the fair features of the Kalash, which has given rise to rumors that they are the descendants of Alexander the Great's soldiers, they cluster with Central and South Asian populations, not Europeans. Like the Ainu of Japan it seems superficial similarities to Europeans, at least in relation to the majority population around them, has resulted in an inordinate expectation of total genome exoticism, when in reality a few particular loci are producing the distinctiveness. Figure 1 from the 2007 paper, Genetic Evidence for the Convergent Evolution of Light Skin in Europeans and East Asians, brings home the point:

The first panel shows a representation of the genetic distance across the genome. Or at least enough to give you a good sense of the phylogenetic relationships. South Asians and Europeans form a clade, as do Native Americans and East Asians. The subsequent panels show Fst values, between population variance, on five genes known at that time to be implicated in between population skin color differences. Note now much different the trees are from the one generated by a large number of loci. Since then more loci have come out of the woodwork, and the peculiar genetic architecture of pigmentation has been rather well characterized. Though most genetic variance may be found within continental races, pigmentation is quite often the exception to this rule. Most of the variance on these loci can be between the races. On SLC24A5 West Africans and Europeans have nearly 100% between population variance. The allele frequencies are disjoint. This shouldn't be that surprising, skin color is highly heritable, and we already know that there's a lot of between population difference. So from that one would infer that there would be a lot of genetic variation. Our skin is our largest organ, and is extremely important as a visual marker of health, age, and identity. The fact that there is so much salient interpopulation difference matters a great deal in the "folk taxonomy" of our species. When considering the relevance of skin color in our taxonomies I thought back to Jared Diamond's 1994 piece for Discover, Race Without Color:

Regarding hierarchy, traditional classifications that emphasize skin color face unresolvable ambiguities. Anthropology textbooks often recognize five major races: "whites," "African blacks," "Mongoloids," "aboriginal Australians," and "Khoisans," each in turn divided into various numbers of sub-races. But there is no agreement on the number and delineation of the sub-races, or even of the major races. Are all five of the major races equally distinctive? Are Nigerians really less different from Xhosas than aboriginal Australians are from both? Should we recognize 3 or 15 sub-races of Mongoloids? These questions have remained unresolved because skin color and other traditional racial criteria are difficult to formulate mathematically.

16 years on I think we can reasonably answer many of Diamond's questions with phylogenetic trees such as the one to the left. There are five races in the tree by coincidence, though the Khoisans are with Africans, and the Americas has its own branch. Yes, Nigerians are probably less different from the Xhosas than Aboriginal Australians. And I guess this tree implies closer to 15 "subraces" for "Mongoloids." And with the rise of skin reflectance measures the trait isn't that difficult to formulate mathematically actually. But as for the salient phenotypic characteristics which humans use to classify each other, and which will remain important socially and culturally for the near future, it makes absolutely no sense to minimize the critical importance of skin pigmentation. Humans are a very visual species, and the complexion of our largest organ will always be of particular interest. This sort of phenetic classification is not scientifically rigorous, I don't want cladists to hunt me down, but, it is not an arbitrary cultural construct. We can't classify people by HLA profiles because we don't have conscious access to such information (and the idea that we can "smell" HLA profiles is still unproven). Our innate pattern recognition competencies are such that naturally folk taxonomies will start with complexion, and use other characters to refine our categories. Just because something isn't scientific doesn't always mean it's silly or arbitrary. Image Credit: Outlook IndiaAddendum: I just realized that Jared Diamond's article came out at the same time as The History and Geography of Human Genes. A quick consultation of this seminal work would have cleared up some of his questions.

More From Discover
Health
Walking vs. Running Benefits: Should You Walk or Run for Exercise?
Health
Is Vitamin C Actually an Effective Cold Remedy?
Health
Why Walking Might Be One of the Best Exercises For Health
Health
What Science Says About the Potential Healing Effects of Essential Oils
Health
Liquid Meal Replacements: Can We Move Beyond Food?
Health
Delta 8 THC Near Me: Where to Buy The Best D8 Products Online
Recommendations From Our Store
My Science ShopDiscover STEM Kits
My Science ShopDiscover 2022 Calendar
My Science ShopStrange Science
My Science ShopElements Flashcards
Shop Now
Stay Curious
Join
Our List