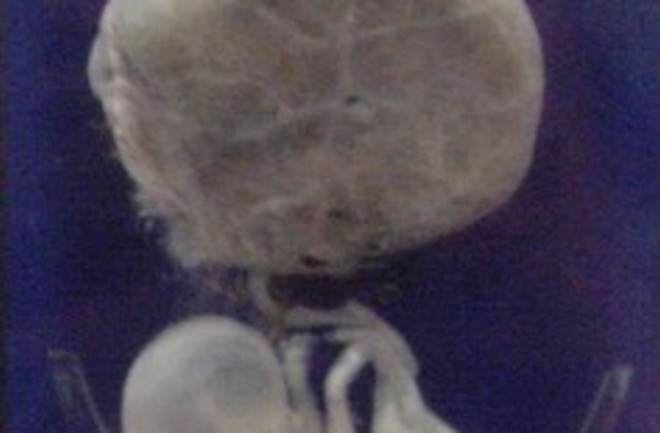 Fetus at ~12 weeks I am going to get back to the eugenics debate at some point, but it is hard to motivate myself. This is due to a combination of complacency and sanguinity. Many of those who use eugenics as a "scare word" or are "very concerned about it" don't really seem to get past generalities when it comes to the present situation (i.e., there is detailed exploration of past atrocities, and some exploration of rather unrealistic scenarios, such as occurred with the "Chinese eugenic" story, but little concrete engagement with realities such as the high abortion rates for positive tests for Down syndrome). In more crass and intellectually vapid discussions liberals and conservatives tend to use eugenics as a term of selectively useful instrumental rhetoric, a bludgeoning instrument only in the mindless screaming discourse. Meanwhile, we have advances like the whole genome sequencing of second trimester fetuses. This is still basic science, but in genomics basic science is translated really fast to the consumer market. I'm ~90 percent sure my daughter will have a 10 x whole genome sequence by the end of 2014 (I might even get her parents in on the game for a trio). So, submitted for your interest are two papers on first trimester noninvasive screens for Down syndrome due to aneuploidies (and other syndromes). Non-Invasive First Trimester Blood Test Reliably Detects Down's Syndrome and Other Genetic Fetal Abnormalities:

An Ultrasound in Obstetrics & Gynecology study by Kypros Nicolaides, MD, of the Harris Birthright Research Centre for Fetal Medicine at King's College London in England, and his colleagues is the first to prospectively demonstrate the feasibility of routine screening for trisomies 21, 18, and 13 by cfDNA testing. Testing done in 1005 pregnancies at 10 weeks had a lower false positive rate and higher sensitivity for fetal trisomy than the combined test done at 12 weeks. Both cfDNA and combined testing detected all trisomies, but the estimated false-positive rates were 0.1% and 3.4%, respectively. ... A second Ultrasound in Obstetrics & Gynecology study by the group, which included pregnancies undergoing screening at three UK hospitals between March 2006 and May 2012, found that effective first-trimester screening for Down's syndrome could be achieved by cfDNA testing contingent on the results of the combined test done at 11 to 13 weeks. The strategy detected 98% of cases, and invasive testing was needed for confirmation in less than 0.5% of cases.

We did CVS. We'd rather not have to in the future. The key is to move positive tests into the first trimester. No matter the reality that most couples who receive a positive result in early second trimester choose to terminate, when it comes to killing a fetus every week counts. You can see what I mean when you look at how abortions are performed as a function of fetal development. Not only that, if you read the source papers you see that the typical woman who receives these sorts of screens is 35-40 years of age, and in that case with the fertility clock ticking every week is of the essence. Citations: