A woman suffers from digestive symptoms that wax and wane for months. What could be the root of her mysterious illness? 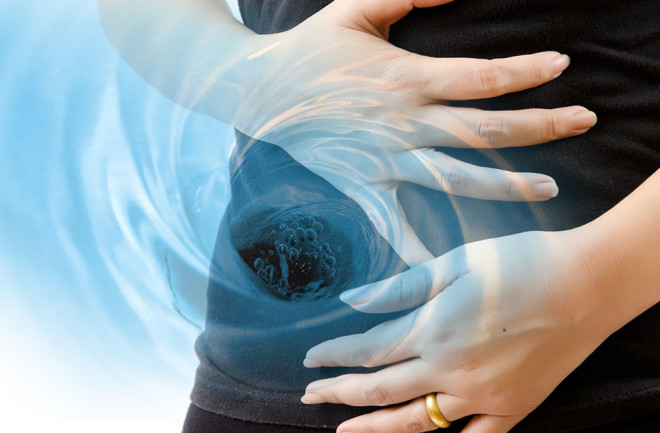 “I’ve never seen my belly so big,” said Christina, puffing her cheeks out like a cartoon character. “It keeps bloating and bloating.”

Christina, the wife of my good friend Norman, was a healthy 50-year-old who took no medications and had no chronic health issues. She had first told me about the bloating, diarrhea and stomach cramps one month earlier. The symptoms had been plaguing her for weeks. Because it’s unwise to treat friends and relatives, I had referred her to Dr. Travers, an excellent local gastroenterologist.

Travers ordered a stool analysis, which indicated rotavirus, a common cause of prolonged diarrhea in infants and young children but rare in adults. The diagnosis was good news since rotavirus usually goes away without treatment.

Christina improved for a while, but now her symptoms had worsened to the point where she was spending nights in the bathroom, doubled over with cramps and diarrhea. “The silver lining is I’ve lost 10 pounds,” she joked, thumbing her loose waistband.

“Are you still taking the lactase?” I asked. Two months ago, in June, Christina noticed that dairy products would upset her stomach. Guessing she was lactose intolerant, Christina started taking lactase, the enzyme that helps digest lactose, with meals.

“It’s not helping anymore,” she said.

Something wasn’t right. Despite the positive stool sample, I wasn’t confident that rotavirus was the cause. Stool samples are sometimes wrong, and rotavirus can also be present but not show symptoms. But what else could it be?

Cancer and ulcerative colitis — an autoimmune assault on the intestines — could cause symptoms like hers, but they usually progress to intestinal obstruction or blood in the stool, which she did not have. She tested negative for celiac disease, another food-triggered intestinal disorder.

As for possible infectious causes, the list was long.

She was spending nights in the bathroom, doubled over with cramps and diarrhea.

But in addition to not bleeding, Christina also had no fever. So it was unlikely to be dysentery caused by invasive bacteria, such as Campylobacter or Salmonella. Besides, what kind of stomach bug lasts for months?

Mysterious, hard-to-diagnose abdominal conditions, like irritable bowel syndrome, can bedevil patients for years and lack a definitive cause or cure. It’s a tempting label for doctors to affix when a diagnostic work-up hits a dead end.

I was stumped. “Drink fluids. Don’t get dehydrated,” I reminded her somewhat lamely. “You need to go back to the gastroenterologist.”

By the time she saw Travers a week later, the pain had gotten sharper and shifted to her upper abdomen and lower chest, and she occasionally vomited. These were symptoms of esophageal reflux or stomach ulcers.

But an endoscopy of the esophagus and stomach, which involved putting a camera down there and taking a look, showed nothing amiss. An ultrasound of the right upper abdomen showed no gallstones, an often-overlooked cause of upper (not just right-sided) abdominal pain. Travers was diligently chasing every symptom and finding nothing.

That evening, I visited Christina and Norman, who said that Travers wasn’t overly concerned and did not plan to see Christina for a month.

“I almost cried,” Christina said. “How could there be nothing wrong? Then he said, ‘Intestinal bugs like rotavirus can damage the gut lining and impede digestion for a while. It will work itself out.’ ” Her voice petered out. “It is not working itself out.”

The couple had planned a vacation to Machu Picchu, a 15th-century Incan citadel in the Andes of Peru. “We’re due to leave next week,” Norman said, sounding dejected. “It was supposed to be her birthday present.”

“If I go in this condition, I’ll just spend it in the bathroom,” Christina said.

Baffled, I mumbled something about hydration and said goodnight. That weekend, during a road trip, I called (hands-free) an old friend from physician residency. Once we’d caught up on kids and life, I related Christina’s saga.

“The cramping gets pretty bad,” I told her. “And the bloating won’t quit. It’s been months.”

Most medical mysteries unravel like detective stories: You cross off possibilities one by one, winnowing them to a few suspects. Eureka moments are for television.

Except this time. If I hadn’t been driving, I would have slapped my forehead.

Nothing but Giardia causes such bloating. During my medical internship in Seattle, patients returning from camping trips described their bellies inflating. They called the condition “beaver fever.” Having attended medical school in New York, I couldn’t help needling Seattleites that they were more likely to get sick drinking from a Cascades mountain stream than a rusty faucet in Manhattan.

Giardia lamblia is not a bacterium, but a single-celled protozoan that gets around by cracking its whiplike flagellum. Found worldwide, many strains infect only animals (beavers are a common host), but some strains branch out to humans. Excreted in feces, Giardia cysts can survive in cold water and are resistant to chlorination. Giardia can be contracted from contaminated water as well as undercooked or poorly washed food. Rivaling E. coli and other invasive bacteria as a cause of turista, or traveler’s diarrhea, Giardia distinguishes itself as the delayed-action bug.

Bacterial dysentery usually hits a day or two after exposure, so returning travelers can’t miss cause and effect. Giardia has a slower fuse. Symptoms usually begin a week or so after exposure and aren’t as dramatic. There is no bloody diarrhea and less abdominal pain and fever than classic turista.

But you don’t have to go abroad to catch Giardia. In North America and Europe, daycare centers are hot spots, where it rivals rotavirus as a cause of non-dysentery diarrhea. Giardia is in something like 5 percent of stool samples taken in the U.S. Over time, the body raises its immunity — about half of people exposed will never develop symptoms — but that’s no guarantee exposure to a new foreign strain won’t set off a round of misery.

My mistake was not starting from the beginning. In May, three months earlier, Christina had traveled to Indonesia on a business trip. She had a nasty stomach bug a week afterward that soon went away.

This is Giardia’s nasty ruse: Its symptoms can wax and wane over months. Each flare-up seems like an unrelated problem.

Lactose intolerance, which Christina noticed in June, is a hallmark of Giardia. Weeks after the stomach bug abated, the lactose intolerance chapter began. A month after that, the abdominal pain, bloating and intractable diarrhea appeared.

Travers included a test for Giardia in the original stool sample, but multiple tests are sometimes needed for a positive result. My Seattle colleague said that if a returning hiker shows Giardia-like symptoms, she treats the patient and doesn’t bother with a stool test.

I pulled into a rest stop and called Christina. “I know what this is,” I told her. “You need an antibiotic called Flagyl. I’ll call in the prescription right now.”

But after one day on the Flagyl, she felt worse. Norman called to say she had passed out sitting on the toilet.

“She needs IV fluids. Take her to the ER,” I told him.

At the emergency room, they checked her blood work, gave her 2 liters of saline and did a CT scan to look for colitis, a fairly common but non-specific inflammation of the large intestine. Everything came back normal.

Christina continued on the medication. After day two, she slept better than she had in weeks. In the morning, the diarrhea came only once. They decided to risk the trip to Machu Picchu.

The following day in Peru, Norman recounted later, she was downing some breakfast, with no dashing for the bathroom. By day five on the antibiotic, she was a new woman.

Christina wasn’t out of the woods. Giardia is a stubborn beast and can take several rounds of antibiotic treatment to cure. Not only that, but the wily protozoan may set up shop as an asymptomatic chronic infection that keeps shedding cysts in the feces while causing poor absorption of vitamins and carbohydrates. As another parting shot, the lactose intolerance can last many months, even after the infection is fully eradicated.

But Christina played up the positive and was happy to show off her now loose-fitting pants.

A week later, she tripped over her pant leg and fell, scraping her hands and face. As I checked for fractures, she said with a sigh, “Does this little bugger ever run out of tricks?”

Tony Dajer is director of the emergency department at New York-Presbyterian/Lower Manhattan Hospital. The cases described in Vital Signs are real, but names and certain details have been changed.

[This article originally appeared in print as "No Relief."]