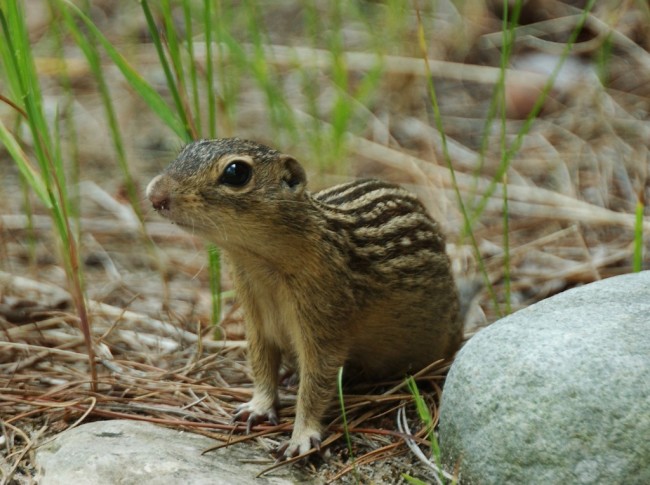 You may be physically fit right now, but if you spent all winter snoozing and starving, you'd emerge looking a lot more "pool noodle" than "beach body." Yet mammals that hibernate don't have that problem. Rather than stumbling out of their dens on atrophied legs, they hop right into hunting for food and dodging predators. How they manage this is a secret they guard in their chilly burrows. Some ground squirrels may have given away a clue, though. Scientists found that their bodies start building new muscle in late winter—well before they leave hibernation. "It was hard to believe," says Allyson Hindle, who did the research at the University of Colorado (she's now at Massachusetts General Hospital). She and her coauthors studied the thirteen-lined ground squirrel, Ictidomys tridecemlineatus, a little North American rodent with snazzy stripes. Like other ground squirrels, it hibernates in winter. The squirrel burrows underground, curls into a tight ball, and slows its breathing and heart rate to nearly nothing. Its body temperature drops to match its environment. Once every week or two, it warms its body up for about 12 hours, though it stays sleeping in its burrow. The researchers used a few different methods to peek inside the drowsing bodies of ground squirrels. A half-dozen animals were weighed and given full-body MRIs at 10 time points during the year. During the hibernation months, each squirrel's body mass steadily dropped as it lived off its fat stores without eating. By the end of hibernation the squirrels had lost more than 40 percent of their weight. From the MRI scans, the scientists calculated the volume of the animals' hind leg muscles. They saw that as ground squirrels lost weight, their muscles shrank too. But while the squirrels weighed the least in April—at the end of their hibernation—their muscle volume stopped plummeting before then. Sometime during the final two months of hibernation, squirrels' muscles started to pump up, even while the rest of their bodies continued shrinking

. In a separate study, researchers directly sampled the muscles of Ictidomys tridecemlineatus at different times during hibernation. They looked at several muscles from both the front and back legs. Once again, they saw that muscles started to grow at the end of winter, while the squirrels themselves were still withering away. The researchers put a molecular marker into the bodies of ground squirrels and were able to observe how quickly the animals were building new proteins. They did this three times during the year. At the start of hibernation, the creation of new proteins in the squirrels' skeletal muscles—new muscle tissue—dropped dramatically. But later in the winter, the squirrels started cranking out new muscle proteins at summer levels. Hindle says scientists don't have a good understanding of how hibernating mammals keep their muscles from atrophying. If a human or a rat let its limbs go unused for so long, they'd shrivel dramatically. Now it seems ground squirrels may get around the problem by actively making new muscle while they're still dozing. Although a hibernating squirrel looks pretty much the same in November as it does in March—like a furry, curled-up popsicle—its body may be very different on the inside. How do ground squirrels bulk up without eating or exercising? Hindle says that if her findings hold up, the next question will be where hibernating squirrels get the resources to build new muscles. "Are some [other] tissues being exploited to help muscles get a jump start on spring?" Hindle and her colleagues think they might have found something exciting and new in the field of animal hibernation. But they didn't reach their conclusions in isolation, like curled-up rodents in winter. A group of scientists at the University of Wisconsin had separately reached the same results. The researchers combined their findings to write this paper. "When we discovered that we each had different data that supported the same story," Hindle says, "we realized that we might be onto something."