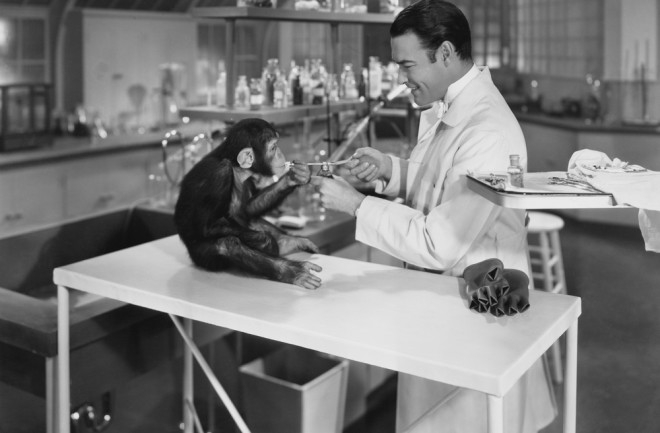 Research with chimpanzee. Courtesy of Everett Collection / shutterstock Researchers have made strides in understanding human diseases such as Hepatitis C and HIV-Aids by using chimpanzees as test subjects. But public and institutional pushback has caused the U.S. National Institutes of Health (NIH) to rein in its chimpanzee research in recent years. A report [pdf] released by a NIH working group Tuesday calls for an even more drastic cut in the number of chimpanzees used for research as well as a reform of the way that research is conducted in the future. Chimpanzees are a valuable resource for medical research because they are the present-day species most closely related to humans. For the same reason, using chimps as test subjects brings up a whole crop of animal rights issues. The real question is if these animal studies are really necessary for medical research anymore. The National Institutes of Health are responsible for over half the world's research chimps. Only 282 of their 670 chimpanzees are still actively used in studies; the rest are either inactive or retired. Another 350 chimpanzees are scattered among other research facilities across the country. NIH has been seriously rethinking its use of chimpanzees over the past couple of years, so the director commissioned a working group to counsel future chimp research efforts. The group's recommendations to the NIH, released this week, will be available for public comment for the next 60 days before the NIH director makes a final call on putting the recommendations into effect. The report recommends retiring the vast majority of research chimpanzees and relocating them to sanctuaries ASAP. Congress has already put a ceiling on federal chimp retirement spending---no more than $30 million a year. The counsel advises that only 50 chimps be kept for future studies, and that the bar be raised on what studies will qualify. In order to conduct tests on these primates, studies would need to be proven necessary for human health and impossible to conduct without the primates. Projects would also require approval from an independent committee that includes public representation. The NIH working group also wants to improve the standard living conditions for research chimps: at least 1,000 square feet per chimp, with opportunities to climb and forage out-of-doors, and groups of no fewer than seven individuals. Not a single research facility in the U.S. currently meets these standards. If the recommendations make the cut, life will be looking better for current and future research chimps alike.