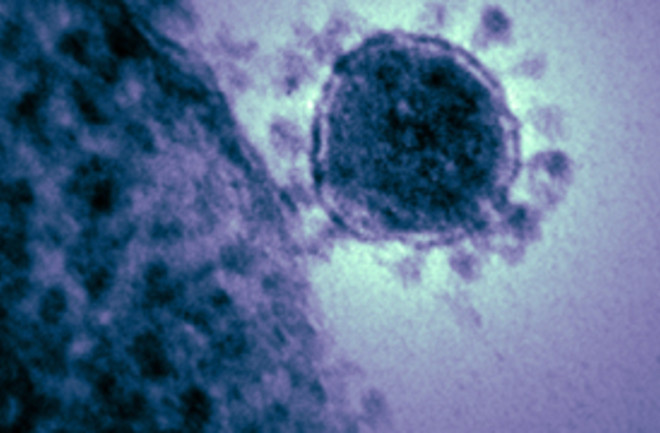 The novel coronavirus is shown in this colorized transmission electron micrograph. Image courtesy of NIAID/RML Beth Fischer A virus related to SARS has claimed its sixth victim, officials announced yesterday. A British man has died of the coronavirus, called HCoV-EMC, which was first identified last year. There have been a total of 12 cases of the coronavirus in the UK, Saudi Arabia and Jordan. Now in a new study researchers have actually quantified the infection rate of the new virus. Results show that at a cellular level EMC is as efficient at infecting human cells as the common cold. Scientists isolated cells from the lining of three healthy people's airways and cultured them in the lab, then introduced EMC, SARS, and a common cold virus to different groups of cells. They found that EMC did indeed replicate in the airway cells (this tissue is especially vulnerable, which explains why infected individuals suffer respiratory problems). No detectable inflammation was produced, meaning that cells' inbuilt immune defenses didn't even see the virus, signalling that EMC is very effective at evading immune system defenses. However, its efficiency at causing disease is yet to be determined. Many coronaviruses are similarly good at infecting human cells---ie, getting inside them and replicating---but they cause only mild disease symptoms. The research, published in the online journal mBio yesterday, shows the new coronavirus "grows very efficiently" in human cells, lead author Volker Thiel said in a press release. That suggests it is well-equipped for infecting humans despite its origins in animals. The virus's closest relatives are bat coronaviruses, researchers said. Importantly, the study also found that a class of proteins made naturally in the body's immune response, called interferons, can reduce cells' susceptibility to EMC. Interferons are already regularly used in treatment for cancer and hepatitis, and may hold promise in preventing the new virus from taking hold or treating it in infected individuals.